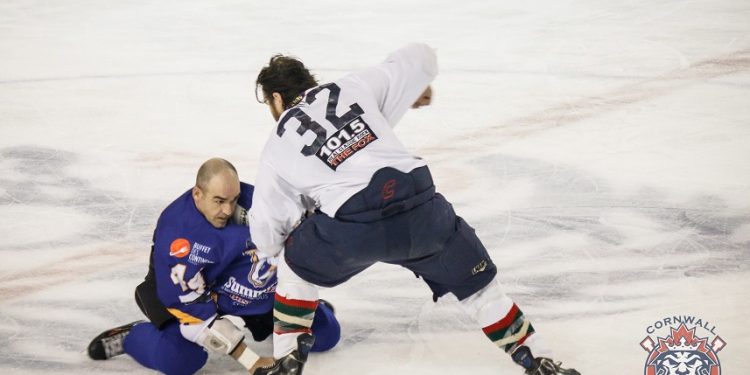 Cornwall Ontario – The young guns came through this weekend for the River Kings, who twice defeated the Laval Predateurs.

Cornwall skated to a 4-1 victory on Sunday afternoon at the Civic Complex in front of 1,374 fans. It was 24-year-old Anthony Mezzagno who led the attack for Cornwall with a two goals and an assist.

Mezzagno opened the scoring at 3:22 of the first period with a powerplay marker, connecting on a feed from Jason Lepine. The 24-year-old Mezzagno, who was acquired in the off-season from Riviere-du-Loup for a draft pick, then took advantage of a Laval turnover and beat Stephane Cesar glove side for his second of the period at 11:38.

Julien Corriveau one-timed a perfect pass from Antony Courcelles by Cesar at 9:57 of the second to give Cornwall a three-goal lead. Former River Kings goaltender Mathew Murphy replaced Cesar after the Corriveau marker.

David Brousseau scored for Laval at 6:52 of the third, just as another River Kings penalty had expired. Less than a minute later however, with the Kings shorthanded, Mezzagno set up Nicolas Corbeil to restore the three-goal lead.

Julien Giroux played the first half of the game in goal for Cornwall and stopped all 18 shots he faced. The 21-year-old Giroux received a nice ovation from the River Kings faithful when he was replaced by former Cornwall Colt Pete Karvouniaris at the half-way point.

Karvouniaris, 24, was sensational in net early in the third as the River Kings killed an extended two-man advantage. He stopped 17-of-18 shots. The Laval powerplay was officially 0-for-14 on the afternoon.

Fan-favourite Chris Cloutier electrified the crowd with a lengthy bout against Eric Lajeunesse late in the third. Mezzagno (first), Corbeil (second) and Giroux were the announced stars, as chosen by the fans.

Dannick Lessard, the former River Kings enforcer who was shot in October of 2012, made his return to the Civic Complex, taking to the ice for warmup. He did not play in the game, however.

The LNAH pre-season wraps up next weekend. The River Kings have a home-and-home with the Sorel-Tracy Eperviers. Cornwall visits Sorel on Friday, Sept. 26. The two teams meet again the following night in Cornwall on Saturday, Sept. 27. The puck drops at 7:30 p.m. The Eperviers are 4-0 this pre-season.

FRIDAY ROAD WIN: Rookie forward Courcelles and veteran Corbeil scored two goals apiece to lead the Kings to a 6-5 road win at Laval on Friday night. Mezzagno chipped in with three assists. Patrick Langlois and Corriveau also scored for Cornwall, which led 6-1 early in the third period. Karvouniaris and Loic Lacasse shared the goaltending duties for the Kings, who were outshot 35-18.