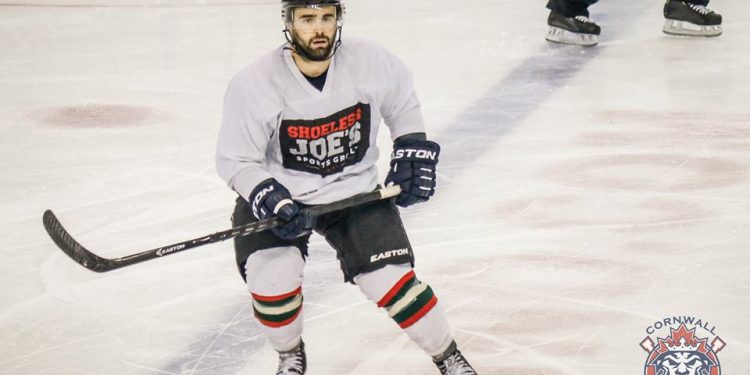 Cornwall Ontario – The River Kings spotted the Sorel Eperviers a four-goal lead in the first period. Goaltender Paul Bourbeau Jr. made sure it held up.

Sorel skated to a 7-4 pre-season victory on Saturday night at the Civic Complex in front of 1,268 fans. The former River Kings goaltender made 38 saves and was named the first star.

It was Cornwall’s final pre-season game, as Sorel swept the weekend home-and-home series.

The Eperviers took advantage of early penalty trouble by the River Kings with two power play goals in the first. Olivier Daunais, Adam Bourque, Sebastien Rioux and Marc-Antoine Moisan had first-period markers. Bourbeau stopped all 19 shots he faced in the first.

Anthony Mezzagno gave the River Kings some life early in the second period when he one-timed a shot past Bourbeau at 2:28.

In the third, Marco Charpentier took advantage of a giveaway behind the River Kings net and scored a shorthanded marker on a wraparound at 4:42. Moments later, on the same powerplay, J.P. Caron’s brought the Kings back to within three goals at 5:45.

The Kings continued to claw back as rookie Julien Houle connected on a beautiful tic-tac-toe passing play from Dylan Garrioch and Chris Cloutier at 8:28 of the third.

Sasha Pokulok then went in on a semi-breakaway and beat Bourbeau through the five-hole with 6:11 remaining in the third to pull the Kings to within a goal. But as Pokulok’s goal was being announced, Charpentier scored an insurance marker 23 seconds later when he beat Pete Karvouniaris on a breakaway.

Adam Bourque iced it with 5:06 remaining.

Garrioch, in his River Kings debut, sparked the crowd in the second when he dropped the gloves with Patrick Robert.

The LNAH regular season begins next weekend. The River Kings visit Riviere-du-Loup on Friday, Oct. 3 and Jonquiere on Saturday, Oct. 4. Cornwall’s home opener is the following weekend on Friday, Oct. 10 when the Laval Predateurs visit the Civic Complex.

ROAD LOSS: On Friday night in Sorel, the Eperviers jumped out to a 4-0 first-period lead en route to a 6-1 victory over Cornwall. Pierre-Luc Faubert scored the lone goal for the River Kings in the third period. Pierrick Martel led the way with two goals for Sorel. Loic Lacasse took the loss in goal for Cornwall.