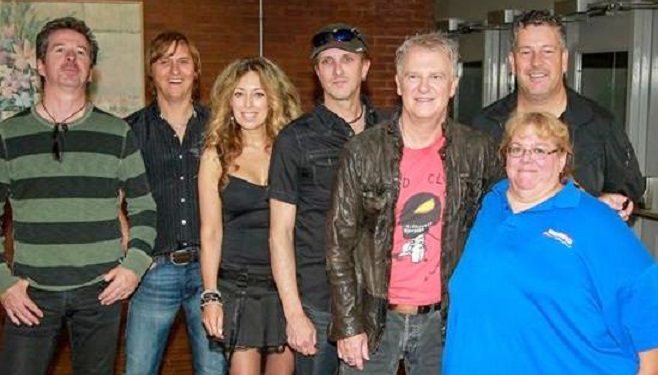 Cornwall Ontario — The 3rd Annual Jamming for Hospice will be held Sunday November 16th at the Agora Center (the old Nativity Hall ) on 301 McConnell Avenue  from 2 to 10pm with about 30 musicians hitting the stage. Starting at 2pm until 4pm there will be acoustic performances with individuals and duets including Jason Graveley with Patti Edwards, Chuck Leclair, Carey B Grant and many others. At 4pm the bands will kick off with Drop of the Hat, Rock Bottom, Front Row, Alison Wonderland and the Trevor Walsh Group. To make the evening personal each band or performer has been asked to dedicate at least one song to someone alive or passed on.

Patti Edwards was inspired to create Jamming for Hospice (JFH) by her friend Paul Herrington in August 2012 when he informed her he was ill and missed jamming with his friends. Patti visited with a friend Reg Menard at Hospice in his final days of life and thought what a wonderful, peaceful environment for someone to live out their final days. Finding out Cornwall Hospice relies a lot on donations, she put the idea together with the help of Paul and many other musicians.

The first year, JFH honoured Reg Menard and $500 was donated with the help from 20 musicians and as many patrons. Paul Herrington died Christmas day that same year, having been able to perform with other musicians, which put a smile on his face and in his heart. In November 2013, JFH honoured Paul Herrington with over 20 musicians including the friends Paul missed Jamming with; Ed Lauzon, Trevor Walsh and Paul Deslaurier. Over $2,500 was raised for Cornwall Hospice along with almost $1,500 for Dean Laponsee. It was a magical and inspiring day.

It will be a fun, musical day with silent and live auctions, an excellent buffet and maybe some surprises. Tickets are $20 advance (by November 8/14) and $25.00 at the door. All proceeds to be donated to Carefor Hospice Cornwall.

The following have donated to the cause: Food cooked by Paul Leger at the Glengarrian Pub & Restaurant, Catering equipment supplied by Marcel Belanger at Bobby’s Place, and food donated by Farm Boy, Larry at Sylvain Sound for sound, and  King Street Percussion (KSP) donating the official Drum Kit.