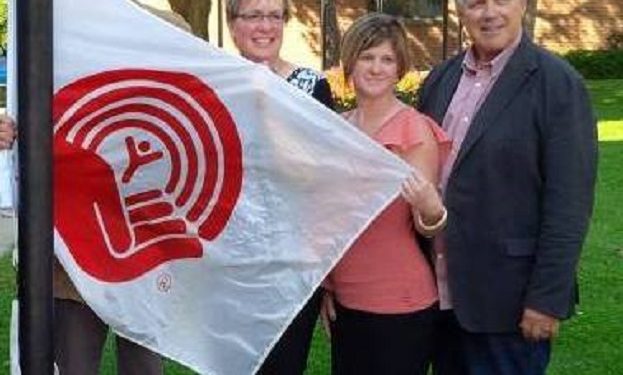 SDG’s corporate campaign began on Monday with a staff kick-off event and flag raising at the County Administration Building. SDG announced a goal of $3,070 in donations by the end of October. In attendance representing United Way were 2014 Campaign Chair Nolan Quinn, Executive Director Lori Greer, volunteers of the Board of Directors and representatives from Beyond 21, a United Way funded agency.

“United Counties of SDG have been a tremendous partner to United Way/Centraide SD&G for several years”, said Nolan Quinn, 2014 Campaign Chair. “We greatly appreciate their continued support and enthusiasm for our Campaign each year. Campaigns like these, with payroll deduction play a huge role in achieving our goal.”

United Way/Centraide SD&G were the recipient of proceeds from the Warden’s Annual Golf Tournament, providing an additional $3,200 to the 2014 Campaign. “We were very pleased to be part of today’s kick off and look forward to a terrific conclusion to SDG’s campaign at the end of the month”, said Quinn.

Evotech sets up operations in the Cornwall Business Park