Jamming for Hospice raises well over $5000 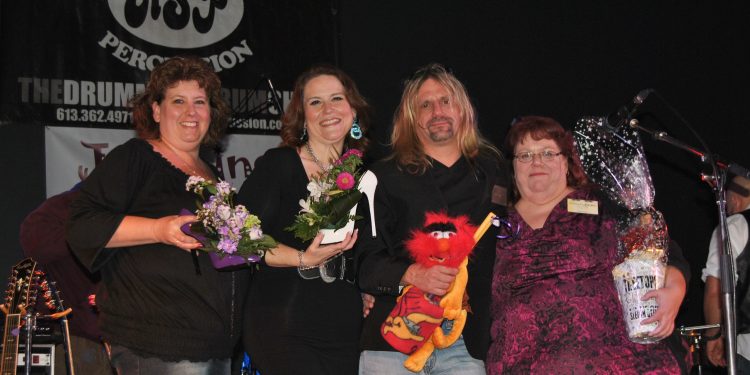 Patti Edwards, the event’s main organizer was inspired by her friend Paul Herrington August 2012 when he informed her he was ill and missed jamming with his buddies. Patti visited with a friend Reg Menard at Hospice in his final days of life and thought that Hospice was a wonderful, peaceful environment for someone to live out their final days.  Patti found out that Cornwall Hospice, a 10-bed palliative care facility that provides end of life care to the Eastern Counties,  relies a lot on donations and so, she put the idea together with help from Paul and many other musicians to host this annual fundraiser.

The first year they honoured Reg Menard and $500 was donated with the help from 20 musicians and as many patrons.  Paul Herrington died Christmas day that same year, having been able to Jam with other musicians which put a smile on his face and in his heart.

One year later, in November 2013, Paul Herrington was honoured with over 20 musicians including the friends Paul missed Jamming with; Ed Lauzon, Trevor Walsh and Paul Deslauriers. Over $2,500 was raised for Cornwall Hospice along with almost $1,500 for Dean Laponsee. It was a magical and inspiring day.

Fast-foward one year to November 16, 2014 and the event had more than doubled raising $5000 through the ticket sales, a Silent Auction, donations, 50/50 draw and door prize and other ticket draws.  And, if that weren’t enough, all guests were treated to a delicious turkey and ham meal with all the trimmings cooked by chef Paul Leger (from The Glengarrian Pub).

Legendary local drummer Roy Nichol (now on tour with April Wine) was also onhand to perform a phenomenal drum solo that left everyone speechless.   The soundboard was manned by Larry Sylvain and Sylvain Sound and Rene Martin of King Street Percussion was also a big help with the stage setup and drum kit making sure everyone sounded spectacular.  It is worthy to note that  all of the performers at the Jamming for Hospice event donated their time and their talents to provide the entertainment.  “You can never go wrong when talent comes fully equipped with a giving heart.”

If you missed this year’s event, please plan to check the Jamming for Hospiece website at http://www.jammingforhospice.com/ and mark your November 2015 calendar so you can plan to attend the 4th Annual event!

The information contained in this article is for informational purposes only and is not in any way intended to substitute medical care or advice from your doctor.