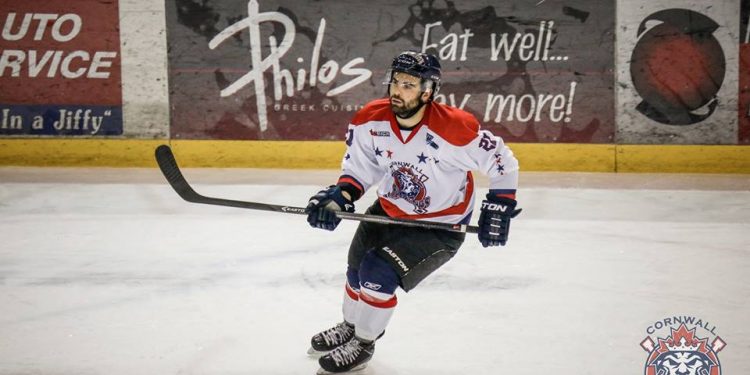 Cornwall Ontario – Doug Andress’ blast from the point in overtime propelled the River Kings to a thrilling 3-2 victory on Saturday night at the Civic Complex.

With the River Kings on a powerplay, Michael Tessier spotted Andress on the point. The defenceman one-timed the perfect feed past Blizzard goaltender Marco Cousineau with 1:46 to play in the extra session, sending 1,412 fans home happy.

Loic Lacasse was outstanding in goal for Cornwall, stopping 40 shots to earn the victory. With the win, the River Kings picked up a much-needed four points this weekend.

The River Kings led 2-0 after 40 minutes but penalty trouble allowed Trois-Rivieres to claw back into the game.

River Kings rookie forward Antony Courcelles opened the scoring with his team-leading 9th goal of the season at 11:44 of the second. Courcelles came down his off-wing and ripped a wrist shot into the top corner, past Cousineau.

It took another perfect shot, this one from Sasha Pokulok, to beat Cousineau. With the River Kings on the powerplay, the smooth-skating Pokulok walked in and wired a wrist shot from the hashmarks into the top corner.

As was the case on Friday night, Cornwall controlled most of the play in the second period. The River Kings outshot the Blizzard 17-10 in the middle frame.

The Trois-Rivieres comeback began with a 5-on-3 powerplay near the mid-way point of the third. Captain Stephane Boileau scored his 15th goal of the season at 11:25. Less than two minutes later, Jonathan Bellemare beat a sprawling Lacasse to level the score.

That set the stage for the overtime heroics. Andress (first), Lacasse (second) and Jonathan Jasper were the announced stars. Trois-Rivieres outshot Cornwall 42-40.

Julien Corriveau also had a strong game for the River Kings. The speedy forward picked up two assists.

The River Kings next home game is next Saturday, Nov. 22 when the Thetford-Mines Isothermic come to town.