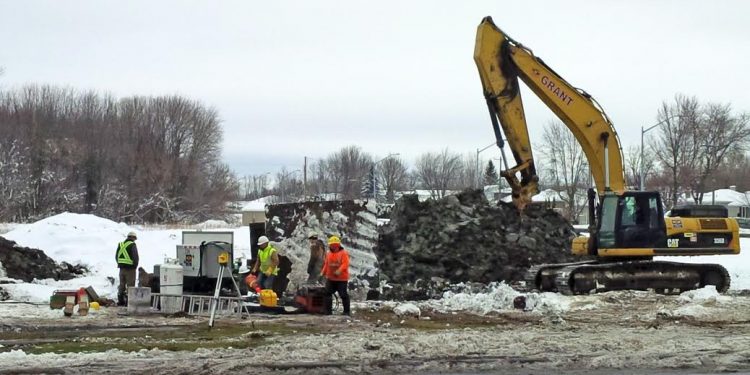 Cornwall Ontario — Work is underway on a new sewage pumping station that forms part of a major sewer rehabilitation project in the area of Eleventh Street and Grand and Miron Avenues.

The new pumping station is being built on the north side of Eleventh Street just west of McConnell Avenue and it will include state-of-the-art controls and a backup power system. Once complete, the structure will be about the size of a small shed and the surrounding area will be fenced and landscaped.

A new subdivision is planned for the northwest corner of McConnell Avenue and Eleventh Street, and the developer is contributing to the cost of the new pumping station rather than building a second one. This will result in savings in ongoing maintenance costs for the City in the future.

The new pumping station represents one small piece of a $5-million project that is designed to address basement flooding concerns. The project started in the summer and it will continue into next year.

“It is one of the largest infrastructure projects that the City has undertaken in recent memory,” said Steve Wintle, Division Manager, Infrastructure Planning.

In addition to benefitting homeowners in the Grand and Miron area, it will also indirectly benefit other sections of the City by redirecting sewage to an alternate outlet and separating storm water. This will create additional capacity in the City’s sewer network.

“This will provide a reduction in surcharge levels further ‘upstream’ in the large feeder trunks that service the central western, northwestern and northern sections of Cornwall,” said Mr. Wintle.

Other components of the $5-million project include:

The Grand Miron sewer rehabilitation project forms part of the Cornwall Blueprint, a comprehensive plan to deal with issues such as basement flooding mitigation and environmental, water and infrastructure awareness.

It serves to address two key pillars of the City’s Strategic Plan – Quality of Life and Efficient Services.

For more information on the Cornwall Blueprint, visit www.Cornwall.ca/Blueprint.