Cornwall Colts fall to Brockville Braves late in the third 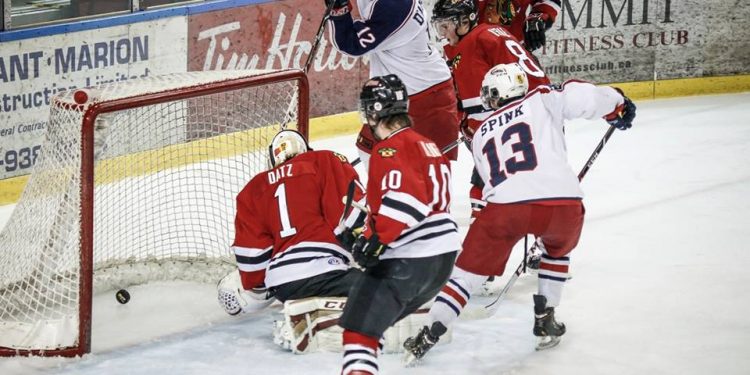 Cornwall Colts — The Cornwall Colts could not hold down the Brockville Braves, and Braves erased a two-goal deficit en route to a 4-3 win.

Brockville let multiple leads slip away before eventually digging out of a two hole to pick up the win. The Braves took a 1-0 advantage on a goal by Eric Israel at 7:19 in the first period. Brockville went down 3-1 after Cornwall’s Kevin Hope put the puck home on the power play at 17:52 in the second period. After evening things up at 3-3 on a power play goal by Sean King at 4:36 in the third, the Braves got the game-winner from Liam Folkes at 19:36 in the third period.

The Colts were unable to stop Brockville from sending pucks towards the net, and the Braves eventually piled up 37 shots on goal.

Brockville also got points from Israel, who also finished with one goal and two assists and King, who also tallied one goal and one assist. Dylan McCrory also scored for Brockville. Other players who recorded assists for Brockville were Andrew Peski, who had two and Jack Billings and Neil Robinson, who each chipped in one.

The Colts were led by Peter Angelopoulos, who registered one goal and two assists. Angelopoulos scored 15:07 into the first period to make the score 1-1. Ryan Patulli picked up the assist. Cornwall also got a goal from Jay DAmour as well. In addition, Cornwall received assists from Tanner Spink, Tristen Elie, and Lawson MacDougall, who contributed one each.

Ruby Sushi to close at the end of January 2015