by The Seeker
in News
Reading Time: 11 mins read 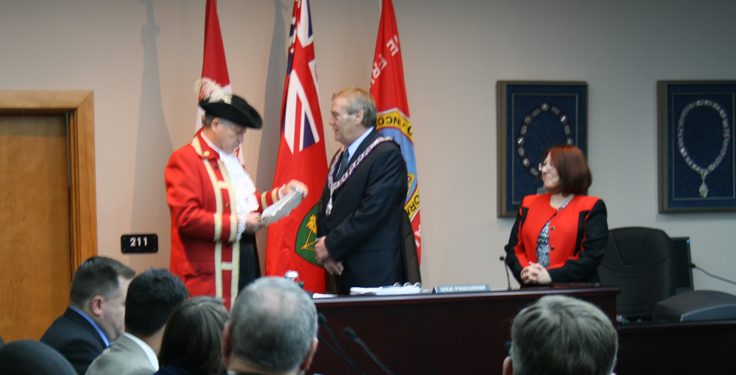 Cornwall, Ontario — Despite rumours of a massive protest being held in opposition to Brock Frost, former River Kings owner, in front of city hall Monday night, the first council meeting went on smoothly as only about a dozen fans showed up.

It was reported that after adjournment Brock Frost was escorted out of the building by police officers not in uniform.

The evening started with town crier Wes Libby performing the ceremonial Oath of Office as pictured above.

On the agenda were many topics, including the Asset Management Plan Update, the Senior Friendly Community Plan Development and the Council Resolution in support of Akwesasne’s Small Communities Fund Application.

“As a member of the Youth Advisory Committee, I feel we have a responsibility to do our due diligence”, says Maurice Dupelle. “I’m wondering if we really need a background check for someone who serves on the Goose Committee”, said Claude McIntosh. “If it’s good for one committee, it’s good for all committee”, said David Murphy.

Some River Kings fans showed up to the meeting.

The next regular public meeting of Council will be held on Monday, January 12, 2015.