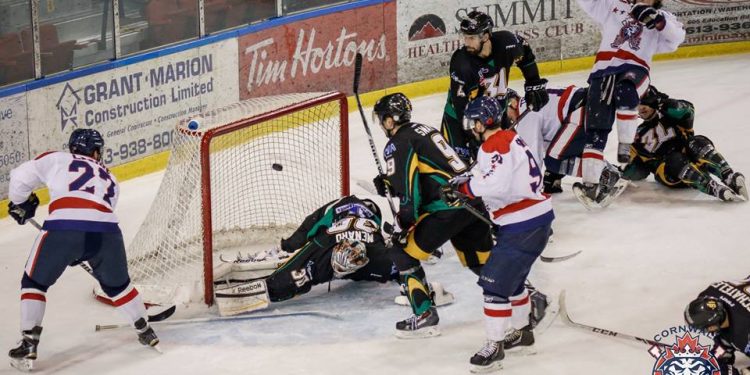 Cornwall Ontario – Sylvain Deschatelets scored twice to lead the Riviere-du-Loup 3L to a 3-2 victory over the River Kings on Saturday night in front of 1,522 fans at the Civic Complex.

The River Kings had plenty of chances to tie the game in the dying moments, but 3L goaltender Louis Menard came up big in the Riviere-du-Loup crease. Menard absolutely robbed Cornwall defenceman Jason Lepine just before the final buzzer sounded.

Jean-Sebastien Berube opened the scoring for Riviere-du-Loup at 9:52 of the first. Berube went in on a breakaway and beat River Kings goaltender Loic Lacasse with a nifty deke.

Sasha Pokulok levelled the score for Cornwall on a highlight reel goal with three minutes to play in the opening frame. Pokulok walked in alone on Menard and perfectly placed a wrist shot in the top corner.

Deschatelets gave the 3L a 2-1 lead when he pounced on a rebound and beat Lacasse at 12:19 of the second.

But rookie forward Antony Courcelles tied the game with his team-leading 12th of the season moments later. With the River Kings on a powerplay, Lepine kept the play alive at the point and got the puck through to the net. Courcelles was there to finish off the rebound at 13:54 of the middle frame.

Deschatelets put Riviere-du-Loup ahead for good with 2:19 to play in the second. Deschatelets was left all alone at the side of the net and had a couple of chances before he finally beat a frustrated Lacasse.

Prior to the game, there was a brief red-carpet ceremony. Jamie Gilcig, of the Cornwall Free News, introduced new River Kings owner Steve Moreau and his family. Moreau thanked River Kings fans for their loyalty. Captain Steve Simoes also addressed the crowd.

The River Kings are back in action next weekend with a pair of home games. On Friday, Cornwall hosts Saint-Georges (8 p.m.) and on Saturday, Nicolas Corbeil and Thetford-Mines visit the Civic Complex (7:30 p.m.).