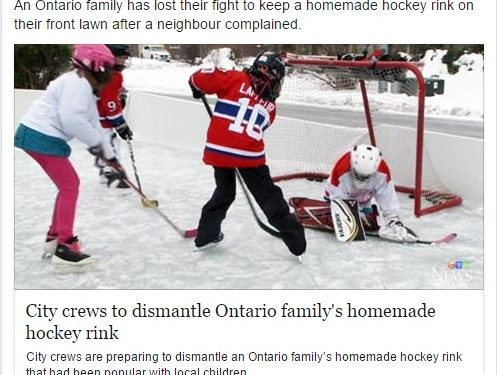 Cornwall Ontario — For the second time in as many weeks, a story about a local hockey rink on a Cornwall family’s front lawn has gone national.

On the morning of Monday January 5th, bylaw was at the Vincent house. Trucks removed the snow around the rink.

Feeling helpless and defeated the Vincent family along with a few volunteers dismantled the boards that same evening to avoid a hefty bill if City Workers had to remove the boards themselves.

CTV did a second story, and it was broadcast on the national news last night. This is the second time this story has hit the national news, metaphorically giving the City of Cornwall another black eye.

A petition on the Cornwall Free News also got well over 2000 signatures from people wanting to see the rink saved.

A series of meme’s went viral on Facebook criticizing the City of Cornwall’s position to so strongly enforce this bylaw.

The boards fall within the municipal right-of-way, which is in contravention of Section 4.6 of the City’s Streets By-law No. 56-2003. Municipal rights-of-way are preserved in order to protect underground utilities and to provide space for snow storage, among other things.

The City received a complaint about the structure, and according to a press release, it has a duty to act on potential safety and liability concerns.

“When we are made aware of liabilities we have a responsibility to correct them,” added Mayor O’Shaughnessy. “The City is expecting to face a significant increase in insurance costs in 2015. As a City, we should be looking at reducing liability, not increasing it.”