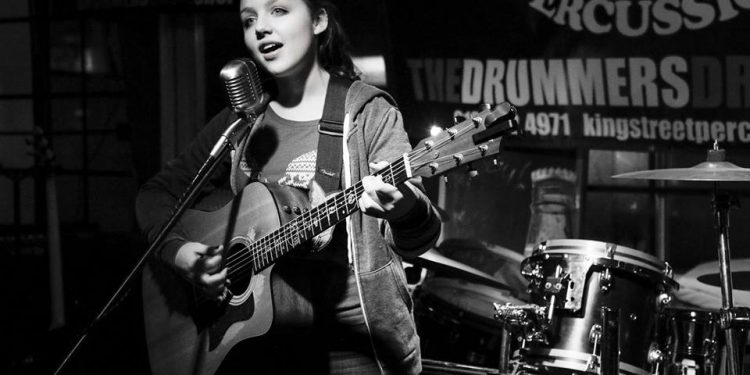 The setting was Lola’s Pub. The event was Barstock 2015. The concert featured bands and musicians of all ages. Headlining was Paul Deslauriers joining forces with Marc Muir, Camil Lapointe, Jim Sharp, and Bobby Tessier.

Opening the night was singer-songwriter Fraser Tamas, daughter of Bobby Tamas, who is the drummer of the rock band Barstool Prophets.

Zach’s father Sean Harley, who is the lead singer and guitar player of Ritual and the Trench Town Oddities, promoted the show and booked Fraser her first Cornwall gig.

“Fraser was a wonderful last minute addition to Barstock. Her set was an amazing start to an awesome night. This girl is a true talent with a beautiful voice”, said Sean Harley.

Fraser Tamas who sung into an iconic Shure 55 microphone played guitar with confidence and had a strong stage presence. Each of her songs was followed by loud ovations from the crowd.

“First and foremost I am proud of both her musical accomplishments and the person she is. I think it is important for me to remember that she is only 16”, admitted Bobby Tamas.

“Those early years for us as a band were some of our greatest memories, and most creative times as well. We were learning how to write, perform, how to run our business, and when we pooled our knowledge and put it all together, it worked. So with Fraser, she is a solo artist at this point so I try to be that band member that she can bounce ideas off of, talk about what she should do next, be very encouraging and supportive, things like that”, added Bobby Tamas.

Fraser started singing and playing piano at the age of 5 and she has been playing guitar for 3 years now. Music was something that was encouraged growing up.

“It was always encouraged. Music was just as important as anything else. It was a focus growing up”, revealed Fraser.

Her inspirations include Ed Sheera and Taylor Swift.

“I like their song writing. Both are incredible and easy to connect with. They had to work hard for their success”.

Fraser has shown a great work ethic working on a music video and an EP length album.

Her first music video entitled “Climb back up” can be viewed on Youtube.

“The album title is from the lyrics of the last song. It’s about taking positive feelings and going with it instead of always being dragged down by the negative”, beamed Fraser.

All songs on the album were written by Fraser Tamas. The album was produced and recorded by Fraser, Graham Greer, and Glenn Forrester. Greer, Forrester, and Steph Mcalear joined Fraser on the album.

“She recorded the songs in two batches really. Five before a trip to the UK and two afterwards. When she got home from her summer in the UK, Glenn and I were blown away by ‘Climb Back Up’, which she’d written while abroad. She’d taken everything we’d focused on before her trip and applied it to the new song wonderfully. I’m so proud of that kid. I was thrilled with how the CD turned out and I can’t wait to see what she comes up with next”, confided Greer.

Fraser hopes when people listen to the album they will be able to connect with it on an emotional level.

“I want people to connect with it, the weird feelings that are not that weird”.

Like any other young musician, Fraser has a lot to balance.

“I have music, school, work, and other curricular activities”.

After high school, Fraser plans to go to University, but not for music.

“Speech pathology is my back up plan”, explains Fraser.

Going forward Fraser plans to make a second music video, this time for the song “Let you Go”. She is also planning more concerts, and to continue to write and record songs.

Her CD “Take it and run” is for sale at Life’s Little Pleasures in Cornwall Ontario. It is also available on iTunes.