Keeping Cornwall warm, one scarf at a time… 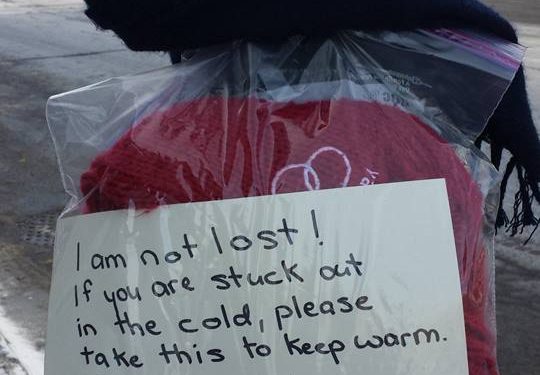 Chantal Gilmour knows you need a good scarf when it’s cold outside.  The “Crazy Charity Knitter” has been in the business of keeping everybody warm for quite some time, but on January 15, after seeing a post on facebook, she took it upon herself to start a facebook page named “Warm Up Cornwall”.

“I decided to start this when I noticed a group doing it world wide,” said Gilmour. “I started one here in Cornwall with the intentions of making in more personal.”

The page has a very simple description and purpose: knit or buy a scarf and leave it somewhere in Cornwall for someone in need.  A tag should normally be attached to the item stating “I am not lost. Take me to keep warm” or something similar.

The movement is not unique and many are following suit in their own way.

Shelley Lauzon, a Personal Support Worker living in Cornwall has been leaving little warmth bundles around town.  “It’s cold out and I saw the post that is on facebook that this has been done in other cities. I Thought to myself why can’t we do that here? I can do that! My closet is full of scarves, hats and other stuff that is not being used,” said Lauzon.   “I know you can bring this stuff to a goodwill store, but it is needed when you are outside facing the freezing temperatures we have right now. Not everyone who is in need can actually get to these goodwill store or even have the small amount of funds needed to buy them.”

Ryann O’byrne offered to help Shelley with collection and distribution, making this a city-wide movement.  Ryann walks everywhere and has forgotten mitts at home numerous times. She know all too well the wrath of winter.  “I’m also going to personally donate a bus ticket to each bundle until I run out. I have about 70 I have been saving over the years,” said O’byrne.
When asked where to drop off, Shelley replied, “I had never really thought this through until Ryann approached me about spearheading a movement for collection. Donations are certainly accepted at my house, but I also encourage people to do it on their own and share where they put it on facebook, kind of like the ice bucket challenge.”

Bundles will be distributed mostly where heavy pedestrian activity occurs, on the main streets and also in bus shelters.

“It brings community together when we all do small acts of kindness. That’s why I invite others to do the same.” Shelley concluded.

Or simply create your own and pin it anywhere!

Editor’s Note: These ladies are but a few of the many people who are participating in this movement, I’m sure.  Nonetheless, kudos to them and all the others who are keeping Cornwallites warm.  I certainly could have used one of those myself yesterday.  It is unclear if this is breaking any bylaws. Some inquiries were done, but no definite answer was available as of press time.