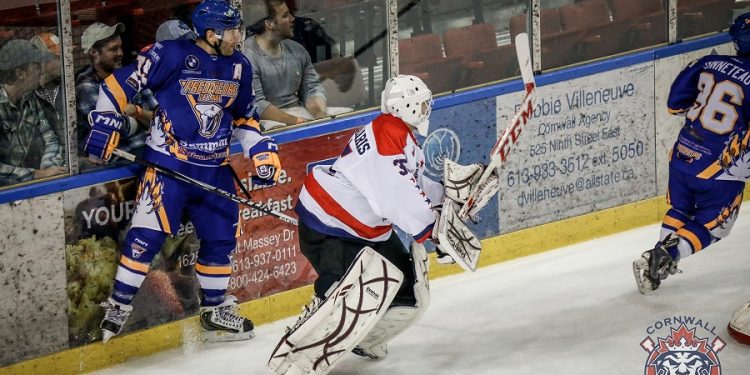 RIVIERE-DU-LOUP – The River Kings came up empty-handed after a long road trip this weekend.

Riviere-du-Loup downed Cornwall 9-2 tonight in LNAH action. The 3L jumped out to a 4-0 lead in the first period and never looked back.

Nicolas Larocque-Marcoux, who made his River Kings debut this weekend, and Michael Tessier scored the Cornwall goals. Julien Corriveau had a pair of assists for the River Kings.

Pete Karvouniaris took the loss in goal; he was chased from the Cornwall crease after the 5th 3L goal. Riviere-du-Loup outshot Cornwall 50-27. Chad Lacasse led the Riviere-du-Loup attack with two goals and two assists.

On Friday night at Jonquiere, Yannick Riendeau scored with 28 seconds to play as the Marquis edged the River Kings 4-3.

Julien Houle, Sasha Pokulok and Francis Ouimet had the Cornwall goals. Riendeau also chipped in three assists for Jonquiere. Karvouniaris was handed the loss in goal for the River Kings, who were outshot 40-27.

Nicolas Therrien, Nicolas D’Aoust, Michael Stinziani and Michel Robinson also suited up for Cornwall this weekend after being acquired at the trade deadline.

HOME ICE: Cornwall is back on home ice Saturday, Feb. 7 when Sorel visits the Civic Complex. Game time is 7:30 p.m. Prior to the game, the River Kings will honour members of the 2004-06 Comets.