Sharks earn silver at U of T

by Editorial Board
in News and Announcements
Reading Time: 3 mins read
24 2 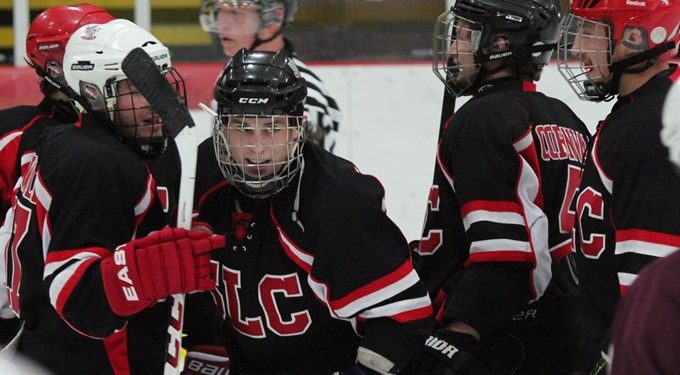 (Scarborough, ON) After an early exit at the SLC Brockville Invitational, the Sharks men’s hockey team entered their fourth tournament of the season, the University of Toronto (U of T) Scarborough Invitational looking for a better finish than the semi-finals.

Prior to the SLC Brockville Invitational, the Sharks were ranked first overall in the Ontario Colleges Committee on Campus Recreation (OCCCR) Power Rankings. After being eliminated by the SLC Schooners, the Sharks will no doubt be looking for a strong finish and earn valuable points towards the power rankings.

Colin Allaire (2), Kevin Veilleux (2), Brandon Gilmour, and Kyle Lagace all scored for the Sharks in the 6-0 victory over the Georgian College Grizzlies. It was the first time the two teams have faced each other this season.

Eric Mantha was not tested often but was able to make routine saves, preserving his first shutout of the season.

Despite having several new players in the lineup, the Sharks played very well together, considering the lack of familiarity amongst some of the players. For the second straight game, the Sharks did not have any trouble finding the back of the net, winning 6-2 over Humber College.

Christian Leger recorded a hat-trick for the Sharks. Mitch Lefebvre (2), and Glenn Belmore scored for SLC. Mantha put in another strong performance in net for SLC, as he was tested often against the Hawks.

Having defeated the University of Toronto-Scarborough club team 8-2 at the SLC-Brockville Invitational, the Sharks knew their opponent would be looking for some redemption at their own tournament. Fortunately the Sharks were able to defeat the host for a second time this season, 3-1. SLC goals came from Dylan Casselman, Bradon Gilmour, and Kevin Veilleux.

The Sharks went with Mantha in game three, and he did not disappoint as he continues to play well in his first tournament of the year.

Down 2-0 after the first period, the Sharks would comeback with three unanswered goals to win 3-2 over U of T Scarborough and advance to the finals. Colton Gallant scored his very first goal as a Shark, Veilleux added his fourth goal of tournament, and Eric Evans scored the game winner.

Making the transition from the varsity golf team, to the Sharks hockey squad, Colin Allaire scored his first goal as a Shark, with Brandon Gilmour adding two goals in the Championship game. The teams would play through a scoreless overtime that would send the game to a shootout where the Hawks came out ahead, winning 4-3.

Boulerice was beyond impressed with his team’s effort considering there were many new faces in the lineup.

“Nobody believed we would have the day we had. We came up here missing our starting goalie and five regulars, who are important pieces of our team.” said Boulerice.

“We put together a simple game plan that focused on getting pucks to the net, being disciplined and always taking care of our defensive responsibilities first. We started strong and were able to build our momentum. The more we played, the more we believed. We probably didn’t take five penalties all day and we capitalized on the powerplay when the other teams lost control” Boulerice added.

“Mike (Pettinella) and I can’t say enough about what we were able to accomplish today. These results will go a long way in our preparation for Challenge Cup. In all my years of coaching today is right up there with a lot of the successes we have achieved in 15 years.”

The Sharks next tournament before the Challenge Cup is the Georgian College Invitational on March 5th.