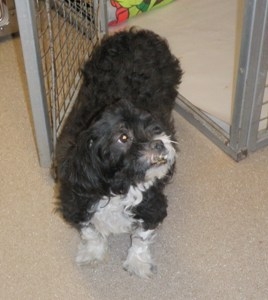 CORNWALL, ON –  On January 27, 2015, Fernand Picard of Cornwall, Ontario, pled guilty to two counts of animal cruelty under the Ontario SPCA Act after allowing his dog to suffer and not providing it with appropriate care.

On September 30, 2014, the Ontario SPCA received a report concerning a small black and white dog that had been sick for ten days, was unable to defecate, was losing weight and appeared unable to walk.

An Ontario SPCA Officer attended the residence and observed a black and white Shitzu-type dog lying on the front porch. The dog did not move when the Officer approached the step.

After knocking, a man came to the door and used the door to push the dog out of the way. The Officer told Mr. Picard to be careful and he then replied “the dog is almost dead anyways.”  The dog was dull, appeared weak and was shivering.

Mr. Picard informed the Officer that the dog had not eaten or had a bowel movement in ten days and that the dog urinated frequently. He also stated that he had no idea what was wrong with the dog, but that he had dug a hole in the back yard to bury it.

The dog was then surrendered to the Ontario SPCA.

A veterinarian examined the dog and found that he had pain in the lower spine, a urinary infection, liver failure, diabetes and hypothyroidism.  Sadly after three days of treatment by a veterinarian, the dog had to be euthanized due to its condition.

Mr. Picard was sentenced and received a lifetime ban from owning, caring for, or living with any animals. He was also ordered to surrender a Lovebird and cat currently in his care to the Ontario SPCA immediately. He received two  years probation, was ordered to pay $661.75 in restitution and fined $125. The Ontario SPCA was given access to his property to perform inspections as per the court order.

“If pet owners are unable or unwilling to care for an animal there are better options than letting the animal suffer,” says Steve Toy, Senior Inspector. “Contact your local Ontario SPCA to discuss available services.”

To report cruelty please call 310-SPCA or email your concern to [email protected].