Monster Slam to rev up Civic Complex on Sunday, May 31st

by Editorial Board
in News and Announcements
Reading Time: 2 mins read
26 0 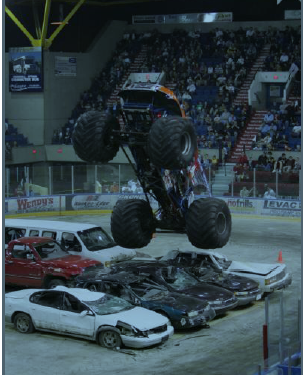 The TV stars are coming back…fresh on the heels of sold out shows across Canada, a brand new Monster Spectacular show is roaring into Cornwall on Sunday, May 31st, 2015 at 2 pm (doors open at 1 pm).
Tickets will be on sale Monday, February 9th at 10 am at the Cornwall Civic Complex Box Office (613) 938-9400, online at www.Admission.com or via phone at 1-855-790-1245.
The ticket price categories are: VIP $40, Extreme (all ages) $28, All Others Adults $24 and Child (12 & Under) $18.
Fans will see some of the biggest, baddest monster trucks on the planet rattling the roof of the Ed Lumley Arena. Plus, see the Pro Speed Bike Stunt Show, with road racing motorcycles dazzling the crowd with impossible
feats on two wheels. Also BMX stunts !
World Champion Jimmy Creten, who has redesigned both the truck and the graphic design of the world famous Bounty Hunter will be as aggressive as always with the 1,500 horsepower at his disposal to try to fend off challengers to his title.

One of the wildest drivers is Trent Montgomerry, who drove Red Baron to a spectacular crash during the final Monster Spectacular event of last season. The Canadian truck will no doubt live up to his catch phrase “No pain, no gain” when he makes his first appearance in Cornwall.

Back behind the wheel of WRECKING CREW – The Legend, Steve Kohler is making a big come back on the Canadian circuit.

Pro Speed Bike stuns, back with Monster Spectacular for 2015, features two members of the world famous STUNT MANIA from Montreal performing never before seen stunts on road racing motorcycles. Twisting the throttle hard, these two technicians perform no handed Wheelies, Front Wheel Stands, Chain Saw Zeros and more – even standing straight up on the tank will flying across the arena at full speed.
The event is a Chris Arel Motorsports production, the Canadian leader in indoor motorsports entertainment since 1987. For event pictures visit www.monsterspectacular.com