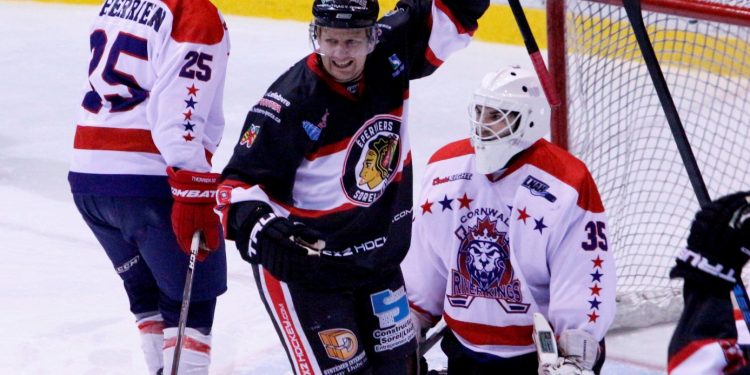 SOREL – Christian Deschenes’ hat trick powered the first-place Eperviers to a 5-2 victory over the River Kings on Friday night.

Sorel’s powerplay was the difference as the Eperviers went 3-for-7 with the man advantage. Cornwall was 0-for-11 on the night.

With their second straight victory over the River Kings, Sorel improved to 26-7-1. The Eperviers hold a four-point lead over Jonquiere for first in the LNAH.

Rookie Nicolas Therrien, with his first of the season, and Sasha Pokulok had the River Kings goals. Francois Ouimet and Guillaume Parenteau each had a pair of assists for Cornwall (9-23-3).

Pete Karvouniaris took the loss in goal, despite a 38-save performance.

Manuel Frechette, who made his return to the River Kings lineup after missing nearly six weeks with an upper-body injury, scored a knockdown victory over Sorel’s Jon Mirasty in a spirited first-period bout.

NEXT WEEKEND: Cornwall is back in action next weekend with a home-and-home against the same Eperviers. Friday, Feb. 20, the River Kings travel to Sorel. On Sunday, Feb. 22, Cornwall hosts Sorel at the Civic Complex. The puck drops at 3 p.m. The matinee will mark the two team’s fourth straight contest against each other.

Local author's first book will suck the blood out of you...