by Editorial Board
in News and Announcements
Reading Time: 2 mins read
27 2 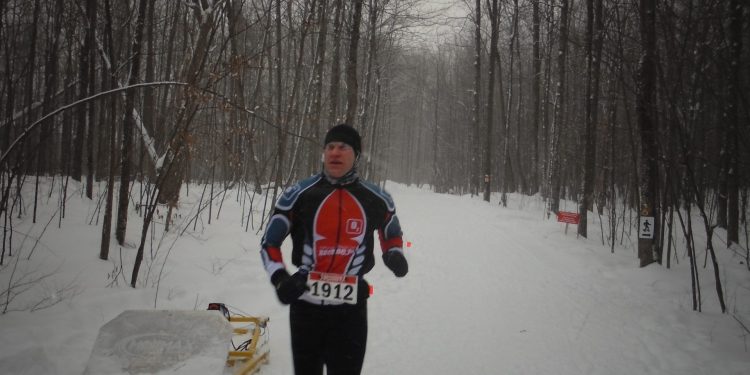 Area resident Rob Lefebvre crossing the finish line in 4th place at the Summerstown Forest Dion Snowshoe Race which was held this past Saturday. Rob is very familiar with the course, living just down the road from Summerstown Forest. Photo credit : FOTST

Summerstown – The 3rd Annual Summerstown Forest Dion Snowshoe Race was held on Saturday, February 14, and the few centimetres of snow that fell the morning of the race made a challenging course even more difficult.

Local area runners were well represented, making up 50% of the 35 person field that took part in the race and for the first time, female runners outnumbered the males. But the overall number of participants was down from last year, and race organizer Gilles Parisien said that the recent cold weather that we have been experiencing is to blame. “It’s never too cold to snowshoe, and after one kilometre into the race, you’re not cold anymore. But the frigid temperatures deter the new runners and the occasional runners from participating” explained Parisien. The slippery road conditions also resulted in approximately 10 no-shows and a group of five runners from Ottawa arrived almost half an hour after the start of the race, but ran the course anyway.

Families were front and centre at the race which was held on Family Day weekend. Nick Best and sister Celine, respectively from Ottawa and Gatineau, finished first in the men’s and women’s categories, while Charley and Katy Murphy, a couple who came down from Toronto for the race, grabbed second spots. The new snow made the trails softer than for the previous editions of this race and probably prevented overall winner Nick Best from setting a course record. His winning time of 36:41 was just shy of the 36:14 posted two years ago by Canadian champion David Le Porho of Montreal.

Local favourite Rob Lefebvre, who lives just down the road from Summerstown Forest, had to settle for 4th place this year, after being on the podium in the previous two editions. In the women’s category, Joan McCuaig, from Newington, finished 5th, just ahead of Jennifer Gareau of Williamstown.

The race was organized by the Friends of the Summerstown Trails (FOTST), and the reputation of the Summerstown Trails as being among the best race venues continues to grow. For many runners, it was their first time at Summerstown Forest and all were ecstatic about the course. What is most appreciated is the fact that the whole race is run on a tree covered course over rolling terrain. “I’ll definitively come back here again to race” said overall winner Nick Best. No less than 13 runners came down from the Ottawa area for the race.

At the conclusion of the race, medals and prizes provided by local sponsors were handed out to the first three finishers, and as is traditional, the rest of the prizes were drawn for amongst all the participants in the spirit of camaraderie which prevails in this sport.

The complete race results are available at www.runningbydesign.com and on the Dion Eastern Ontario Snowshoe Running Series website.