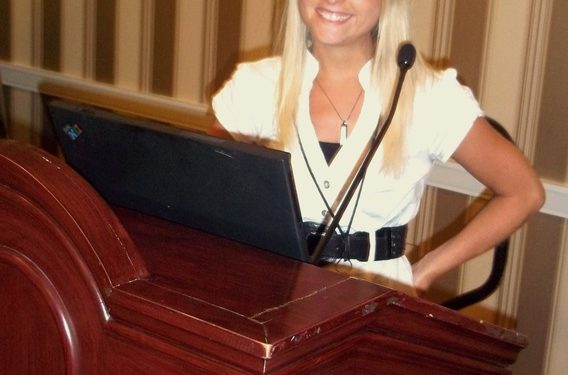 The pain-soaked secrets of a young girl’s diary are now playing a powerful and very public role in the fight against child abuse.

Erin Merryn will explain how as guest speaker at the Children’s Treatment Centre Bike-a-thon Plus Kickoff Breakfast on Wednesday, April 22nd at the Cornwall Civic Complex.

Just a week before her seventh birthday, the Illinois resident was brutally raped by a neighbour and shamed into silence. This sexual abuse continued until Erin was 8 ½ leading her to act out.

When her family moved, it seemed Erin’s anguish might finally end. But the relocation took her closer to a family member who sexually abused her repeatedly between the ages of 11 and 13. Erin started a diary which became her only refuge amid the tears and nightmares.

But in her last year of high school, the young woman found the courage to turn her pain into purpose. She self-published her diary as Stolen Innocence, a book that was soon reissued by a major publisher. Erin began traveling America to end the silence and shame surrounding childhood sexual abuse.

“I decided at a young age to take a stand against evil and expose it,” she says, “to put a silent epidemic in the spotlight and be a voice for the voiceless. My mission is to take the stigma and shame off sexual abuse survivors and give them a reason to speak.”

After two more books and a Master’s degree in social work, the activist is intensifying a crusade to promote Erin’s Law, legislation requiring public schools to teach children an age-appropriate sexual abuse prevention curriculum. She’s traveling to each state capital, lobbying lawmakers to pass the law nationwide. So far, more than half the 50 states have enacted the legislation or are voting on it.

Erin’s passion and determination made her Glamour magazine’s Woman of the Year in 2012. Her voice has also been amplified by major profiles in media ranging from USA Today and TIME magazine to Oprah and Good Morning America.

Now living in Chicago with her husband and daughter, Erin makes it her mission to inspire other survivors with her story of faith, forgiveness and fortitude. At the Kickoff event on Wednesday, April 22nd, breakfast will be served at 6:00 a.m. and Erin will speak at 7:15 a.m. For more information, please contact the Children’s Treatment Centre by telephone at 613-933-4400 or by e-mail at [email protected]

River Kings want you to bring a friend... And a lucky charm!