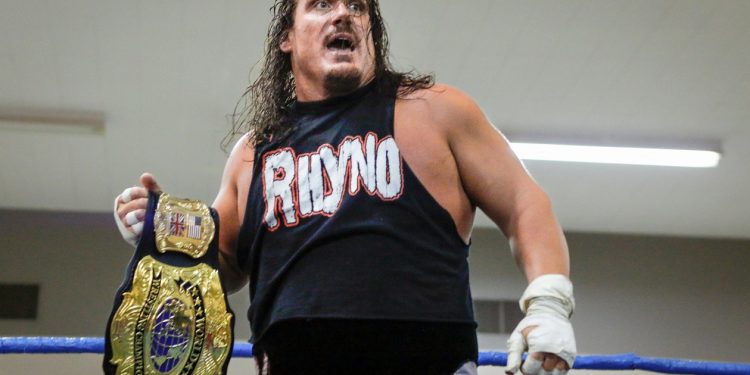 Article and Photo by Jason Setnyk
Cornwall Ontario — The MPW Heavyweight Title Match was a slobber-knocker Saturday night at the Agora.
Rhyno who is a former WWE Hardcore Champion, former ECW World Television Championship, former WCW United States Championship, and former NWA World Heavyweight Champion was in Cornwall for the main event.
MPW Heavyweight Champion Payne, with a little outside interference from Insignia, pinned former WWE superstar Rhyno for the 1-2-3 much to the dismay of wrestling fans in attendance.
However MPW commissioner Pat Paquette reversed the decision and disqualified Payne and awarded the match to Rhyno.
“As CEO of Mecca Pro Wrestling I was getting sick and tired of the Insignia cheating and dictating matches. When I saw them double team Rhyno and when Payne hit Rhyno with the title I had enough, so I over turned the decision and made Rhyno the winner. I wanted the Insignia to know who runs Mecca Pro Wrestling and that it is me,” explained Paquette.
Here are all the results from Saturday’s House of Payne:
-Damien Syles defeated Catalyst
-Decker Leduc defeated Jesse Amato
-Crimson won the Pound for Pound Title with a win over Derric Hamilton
-Cj Felony defeated Deeno
-Joey Valentyne defeated Kawn Chang
-The Barbarians vs. KL Shock and Ray Steel ended in a double count-out
-Mario defeated Bret McLeod
-Persephone Vice defeated Jewells Mallone