5 Questions with the Small Glories

by Editorial Board
in 5 questions with..., News and Announcements
Reading Time: 174 mins read
27 2 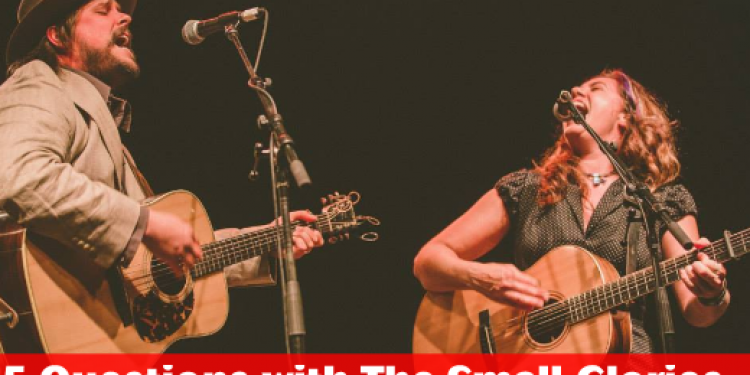 On Saturday, June 20th – Lola’s Pub at 616 Pitt Street in Cornwall, will present another wonderful treat for Cornwall’s music lovers – The Small Glories (a two piece band from Winnipeg whose members include JD Edwards (above left) of The JD Edwards Band & Cara Luft (above right) who was a co-founder of the Juno Award winning Wailin’ Jennys. Special guest for that show is The Tracy Lalonde Band.

I asked Robin McRae, who is in charge of booking all the music acts at Lola’s, “What made you decide to bring the Small Glories to Lola’s and Cornwall and why do you think Cornwall’s music lovers will appreciate this band?”

Here is his answer.

I have been a fan of JD Edwards for years. I first worked with him when he was touring with Nathan Rogers (son of Canadian folk icon Stan Rogers) with Shantero Productions. The intensity he brings to the stage night in and night out was truly captivating. About a year later his own band (The JD Edwards Band) was touring Ontario and I was lucky enough to snag them for a gig at the Lolas. The night was truly magical. He now teams up with Cara Luft (co-founder of Juno Award winning The Wailin’ Jennys) I mean how could this not be a show for the ages. The Loft Sessions video “Had I Paid” by The Small Glories is one of my favourite tunes in recent memory. As far as I am concerned if you have a heartbeat you will LOVE this show. I know I for one will be front and centre from the first strum of the acoustic guitars straight through to the encore, and that’s where everyone else should be too.

The Small Glories came about when Cara and I were asked to perform at the 25th anniversary of the West End Cultural Centre in downtown Winnipeg. The artistic director, Jason Hooper, had a plan for the show that saw two Manitoba artist paired up to learn and perform another Manitoban artists’ song. Cara and I were teamed up and we learned a Greg MacPherson song called, “1000 Stars” that is still in the set for The Small Glories to this day.  A year had passed after that fateful concert and Cara had a solo concert at the very same venue. She had asked me to come and be apart of her band. During the jam sessions leading up to the concert Cara mentioned that she was heading out on the road but her accompanist had backed out of the tour due to other schedule complications. So I piped up and asked Cara if she could take me. She did take me and the west coast tour was a success. So, Cara and I began the journey of The Small Glories.

2. Who are the influences in your music writing and performing?

Cara and I both come from musical families. Cara’s family is steeped in the ways of American and Celtic Folk music, where my family was filled with gospel and classical music. Cara’a love for everything folk comes from years of listening and studying the works of Steeleye Span and Bert Janch to name only two. I, myself went to music school and surrounded myself with jazz, classical, funk, rock, blues and eventually folk music. I was influenced by everything from The Allman Brothers Band to Fred Wesley & the GreyBoy Allstars to the Canadian Brass.

3. Both your voices are amazing but when you perform how do you decide who sings lead and who sings harmony ?

We are two voices two guitars a banjo, harmonica and some auxiliary percussion. Cara is on guitar and banjo while I play guitar and harmonica. There is no real favourites, the band just tries to serve the song.

4. What are your major accomplishments to date?

We’ve only been around for a short time. We haven’t yet had any major accomplishments to really boast about, however as a new duo we have had many obstacles to overcome. I think we have definitely started to see some success for The Small Glories as we continue to push forward, explore and experiment with our music. Before creating the The Small Glories we were solo artists and had never really crossed paths, but since we were strategically thrown randomly together on stage a couple of years ago, we have found a very good groove and started to seriously take to the new sound. We would like to mention that we are playing the Salmon Arm Roots and Blues Festival and the Canmore Folk Festival this coming summer, which are two big events that we are very proud to be apart of.

5. What are your hopes and dreams for the future?

We hope to have a great EP release this summer and a full length album release later this year. We are looking to the future and see TSG touring cross Canada, Europe, the US and Australia and beyond. We feel very passionate about our music and what we do on stage, and we want to share it. We seek to be better song writers and performers, listeners and talkers. We want to give you what you want and what you need yet still bring something fresh and new to the mix and to the music, something you haven’t heard before. We just want to make good music for soul and spirit.

I know I said 5 Questions but I have one more for you …. What should music lovers in Cornwall expect to hear when they come to see you perform in Cornwall next Saturday?

Expect to hear some good old prairie harmonies and good music. expect to hear a few stories from the road and beyond. Thank you for this opportunity to interview you and I know that Cornwall music lovers are in for a treat on Saturday, June 20th at Lola’s. For more info please visit www.thesmallglories.com and enjoy!