by Editorial Board
in News and Announcements
Reading Time: 11 mins read
53 1 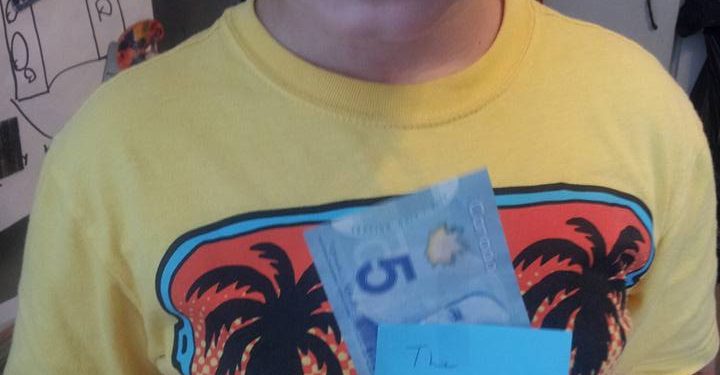 Reports of at least 2 random gifts of kindness surfaced Wednesday afternoon on Facebook.

The gifts, in the form of a blue note attached to a five dollar bill, simply stated : “The universe chose you to receive this gift (smiley face)”, but it sure brightened the day of those who received it.

Michael Galvin is one of the two who found the note. “Mine got slipped under my windshield wiper,” noted Galvin.

The other one to find the giveaway is a little boy.  Arlo O’byrne spotted the $5 bill taped to a Canada post mailbox near Riverdale park.  He was thrilled to make the discovery.

“We were driving in the car and pulled up to the stop sign when he told me there was 5 dollars,” said mom Angela Benoit. “I thought he meant on the ground or something, so I pulled over and he ran to get it off the side of the mailbox. He asked if he could keep it, and after I read the note, how could I say no? He was so happy!”

It is unclear if the Good Samaritan is a Riverdale resident or why he chose this neigbourhood to do his good deeds.  It is also unknown if he randomly select his “victims” or if they are chosen.

“We just wanted to say thank you whoever you are,” concluded Benoit. “You made a 7 year old very happy.”

We would like to find the culprit and properly thank him/her.  If you have been the victim of a random act of kindness or if you have any information about this modern day Robin Hood, please email [email protected]