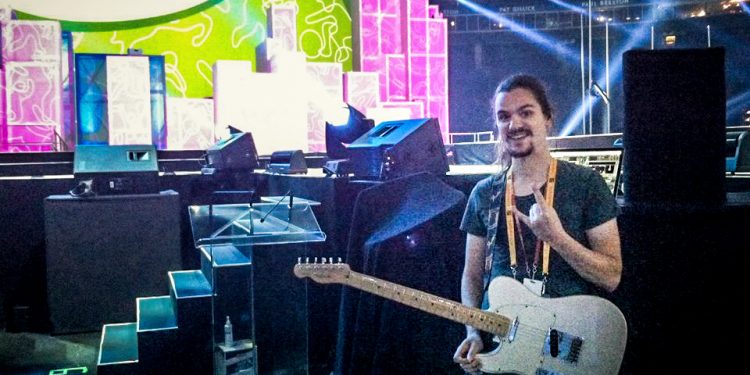 Toronto Ontario — A year and half ago musician Nathan Da Silva played a show in his home town of Cornwall at La Maison Tavern with the band Slyde. Sunday night he played a gig at the Rogers Centre with another band.

The Cornwall-born singer and guitarist played with the Franco-Ontarian band Swing when Team Canada entered the stadium at the closing ceremony of the PanAm Games.

Kanye West, Pitbull, and Serena Ryder headlined the PanAm closing ceremonies, which was broadcast nationally across Canada on CBC Television.

It was a surreal experience for Da Silva.

“When we came out from backstage and were on standby to take the stage, just looking around at all the activity – the athletes, the thousands of people in attendance, the flag bearers – it was certainly a surreal sight to take in.  Meeting Serena backstage briefly was awesome too!  She’s a sweetheart”, says Da Silva.

Although Da Silva is a musician, it is his memories as a part of the Track and Field Club in highschool, that make participating in the PanAm closing ceremony extra special.

“It might be a once in a lifetime chance to play at the Pan Am closing ceremonies, so it’s an absolute honour to be a part of it. I used to train with the late Dave Dorman of the Cornwall Cougars Track and Field Club during my highschool years, so watching Canada’s Andre De Grasse make history on the track was very memorable for me”, said Da Silva before the event.

Nathan Da Silva will be back in Cornwall on Sunday August 9th to play an afternoon concert at Lola’s Pub. Da Silva and Slyde are also working on a new album.