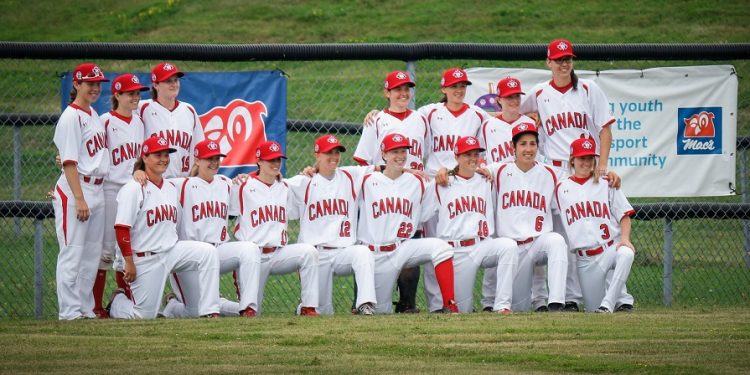 Ajax Ontario — Jenna Flannigan and Team Canada now have a 2-0 record at the PanAm Games after defeating Venezuela 9-3 in women’s baseball. Team Canada also won yesterday, defeating Cuba by a convincing score of 13-1.

Canada had a strong start Tuesday night against Venezuela scoring five runs in the first inning of the game.

Cornwall’s own Jenna Flannigan, who plays right-field, contributed to Canada’s offence once again. Flannigan had one run and one hit tonight. Last night against Cuba she had two runs, one hit, and three RBIs.

Autumn Mills (#4 pictured above) was the pitcher for Team Canada. She had a strong start to the game, and in the first five innings she only allowed two hits. Her shut-out streak was finally broken in the sixth inning when Venezuela scored two runs. Mills also had 3 strike-outs tonight. Jessica Berube finished the game pitching for Team Canada in the 7th inning.

Flannigan, an athletic ambassador for Cornwall and women’s baseball, had carried the Pan Am torch at an Ottawa Championship Professional Baseball Game last month.

Jenna Flannigan and Team Canada will be back on the diamond Wednesday against Puerto Rico in another preliminary round match.

Friends of John Earle establish a trust fund for his children