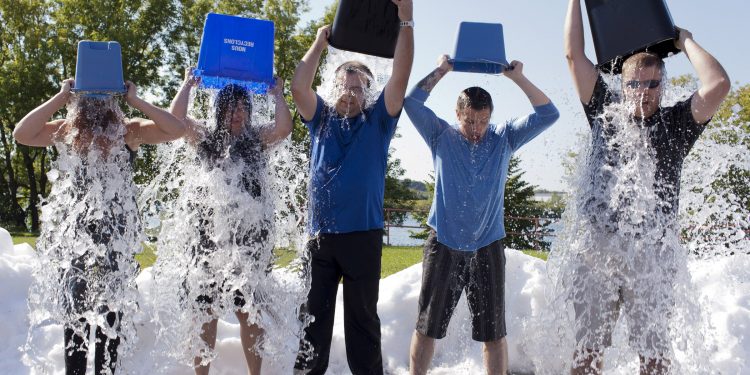 Here is a press release and update from the ALS Association about the progress being made:

Researchers supported by The ALS Association identified a previously unknown function of an important protein related to amyotrophic lateral sclerosis (ALS). The study, which showed that TDP-43 regulates so-called “cryptic exons,” was published this week in the journal Science.

“We hope this will be the first of many research discoveries fueled by people’s participation in the ALS Ice Bucket Challenge,” said Barb Newhouse, President and CEO of The ALS Association. “Progress is being made when it comes to finding treatments and a cure for this disease, and we’re so grateful for the support this August and every August until there’s a cure.”

Round 2 of the ALS Ice Bucket Challenge is officially underway. Major League Baseball is supporting the campaign throughout August, donating to The ALS Association and organizing all 30 MLB teams to take the challenge. Everyone from celebrities, local news anchors, politicians and people living with the disease are once again accepting the challenge.

ALS is a progressive neurodegenerative disease that affects nerve cells in the brain and the spinal cord. Eventually, people with ALS lose the ability to initiate and control muscle movement, which often leads to total paralysis and death within two to five years of diagnosis. For unknown reasons, veterans are twice as likely to develop ALS as the general population. There is no cure, and only one drug approved by the U.S. Food and Drug Administration (FDA) modestly extends survival.

The TDP-43 protein is known to bind to and regulate RNA, the cellular messenger that converts genetic instructions into proteins. Most cases of ALS are characterized by accumulation of TDP-43 into clumps, or aggregates, which may indicate the protein is no longer able to carry out its normal function.

In the current study, Association-supported researchers Jonathan Ling, Ph.D., Philip Wong, Ph.D., and colleagues at Johns Hopkins University in Baltimore, MD, showed that a specific function of TDP-43 is to bind to and repress cryptic exons, bits of genetic instruction that are not used to make protein under normal circumstances. The researchers showed that loss of TDP-43 increased the expression of cryptic exons, leading the cell to destroy messenger RNA containing them, thus reducing the amount of normal protein the cell made, and leading to cell death. They also found an abnormal increase in cryptic exon expression in the brains of people with ALS.

In a recent “Ask Me Anything” (AMA) feature on Reddit, Dr. Ling commented: “All of your donations have been amazingly helpful and we have been working tirelessly to find a cure. With the amount of money that the ice bucket challenge raised, I feel that there’s a lot of hope and optimism now for real, meaningful therapies. After all, the best medicines come from a full understanding of a disease and without the financial stability to do high risk, high reward research, none of this would be possible! “

“This intriguing result provides a new understanding of the normal role of TDP-43,” said ALS Association Chief Scientist Lucie Bruijn, Ph.D., M.B.A. “Because TDP-43 accumulates in most cases of ALS, it is critical that we learn more about its normal functions, and how they are affected in ALS. Replacing those lost functions may be a therapeutic strategy.”

Last year, more than 17 million ALS Ice Bucket Challenge videos were posted to Facebook and these videos were watched by 440 million people a total of 10 billion times. More than $220 million was raised globally with $115 million going to The ALS Association, which is putting these dollars to work funding exciting new initiatives to find treatments and a cure for the disease through research, care services and public policy. To read more about progress since last year, visit www.ALSA.org/progress.

The ALS Ice Bucket Challenge is happening again this August and every August until there’s a cure. For more information, please visit www.alsa.org/icebucketchallenge.