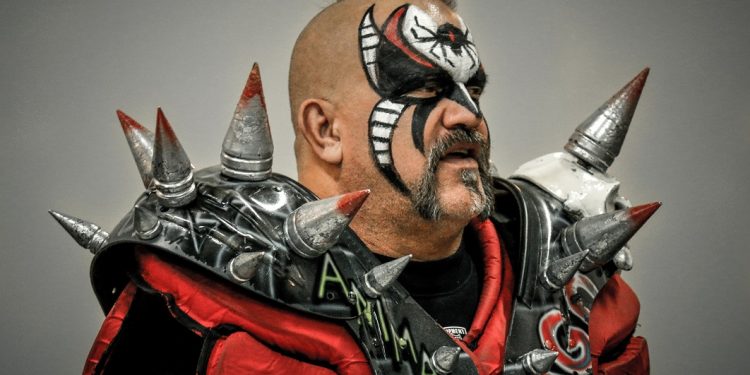 Interview and Photo by Jason Setnyk.

Cornwall Ontario – What a rush it is going to be for wrestling fans. One of the greatest Tag Team Wrestlers of all time is going to be in Cornwall on Saturday October 24th.

Mecca Pro Wrestling presents “What a Rush” featuring WWE Hall of Fame wrestler and three time WWE Tag Team Champion Road Warrior Animal who will be in action at the Agora Centre.

Animal (aka Joseph Michael Laurinaitis) was one half of the Road Warriors / the Legion of Doom with his tag team partner Hawk.

The duo was adorned with shaved heads and mohawks, shoulder pads with spikes, and red and black face makeup.

With their impressive physiques and use of power moves they won over audiences all over the world.

The Legion of Doom, perhaps the most dominant tag team in sports-entertainment history, are the only duo to hold the WWE, NWA, and AWA Tag Team Titles.

In the 1980s the tag team was lead by manager Precious Paul Ellering, and they had huge success in the AWA and NWA.

After a long absence from the WWE, the Road Warriors re-appeared on WWE Raw in 2003 to face Kane and Rod Van Damn for the Tag Team Titles but loss. A few months later Michael “Hawk” Hegstrand tragically passed away.

Animal returned to the WWE in 2005 teaming with Heidenreich and defeated MNM at the Great American Bash for the WWE Tag Team Titles. Animal dedicated the match and victory to Hawk. It was the last time a Road Warrior would hold a major wrestling title.

In 2011 The Road Warriors with Paul Ellering were inducted into the WWE Hall of Fame. That same year Laurinaitis released an autobiography titled The Road Warriors: Danger, Death, and the Rush of Wrestling.

In 2012 Road Warrior Animal made a return to the WWE and defeated Heath Slater as a part of a promotion for Raw’s 1000th episode.

Road Warrior Animal still wrestles in the independent circuit, and when he is not on the road wrestling he enjoys time with his family. His son James Richard Laurinaitis is a lineback and NFL Football player for the St. Louis Rams.

1 – What does it mean to be a WWE Hall of Famer and what was one of the highlights of your career?

Whether it is the WWE Hall of Fame or the one for New York, or Chicago, it means being voted in by your peers. It means they think you are among the best at what you do. It’s not something I take lightly. One of the highlights was Hawk and I winning every major tag title championship from WWE to NWA to AWA.

In the 80s, 90s, and 2000s they gave tag teams the credit they deserved. WWE didn’t promote Tag Teams as well, and the tag team division often got hosed. The AWA and NWA promoted tag teams well. When the WWF was main eventing Hogan versus Warrior in singles competition, the Road Warriors were also filling arenas and putting butts in seats. Today it is like a clone machine, tag teams are the same size and build. We built personalities in our era. The Hart Foundation built their identities as being Canadians. The Steiner Brothers, Ron Simmons and Butch Reid, Midnight Expression, Four Horsemen, each had their own personalities. Legion of Doom was on top and these were all Hall of Fame tag teams. If the tag division is going to be successful they have to do something distinct. When the writers get the wrestlers to say generic things, the fans see through it.

3 – You worked along side Hawk for many years before he passed away. What is your most treasured memory of him?

We spent twenty-one years on the road. We were like brothers, and fought like brothers sometimes, but we were close. He knew what I was thinking, and I knew what he was thinking. We knew what to do in the ring. My fondest memories on the road? We went to Japan and had fun and did crazy things. We visited a Japanese cemetery, and drove Harley’s in Tokyo. We went all over Australia which was cool. There were lots of great things we’ve done. Fought and beat the tag champs in Australia and Mexico. We’ve wrestled in the small territories and they are becoming strong again. I like giving back to the promotion, and playing shows in cities like Cornwall Ontario.

4 – Do you still keep in touch with Paul Ellering? What does he mean to you?

Paul was mentioned on a recent episode of RAW in Minneapolis. They mentioned how he was the manager of the Legion of Doom. I was in St. Louis at the time watching my son play football for the Rams. I still keep in touch with Paul Ellering. He is a great guy. I got to see his huskies when he was up in Alaska. Now he owns The Historic Rock Tavern in Grey Eagle, Minnesota. It’s a quaint bar. If you are ever in Minnesota, I would recommend going.

5 – You were in the spotlight for many years, and now your son James Richard Laurinaitis is a lineback and NFL Football player for the St. Louis Rams. What advice did you have for your son when he came into the spotlight for the first time? Also did you ever want James to become a professional wrestler?

James is a smart kid. He learned early on that nothing comes easy without hard work. He is phenomenal with interviews. He never BS’s the fans. He learned that from me. To stay modest. I coached him in football, baseball, and hockey. He decided to go for Football. He loves wrestling too. He wrestled his sister since he was young. Vince McMahon talked to him one time, said wrestling is in the family, and told him the door is always open. He is doing well with the NFL, he doesn’t need to go into wrestling, but if he ever choose to, I would support his decision.

Thank you for the Interview Road Warrior Animal.

Thank you. I’m excited to come to Cornwall and wrestle, and to take photos with the fans with the shoulder pads, and after the photo say: Oh what a rush!

About the show: Doors open at 7pm and bell time is 7:30pm. Tickets go on sale September 10th and are available at Poppy Pawn Shop, Floral Expressions, and the Lotto Ticket booth at the Cornwall Square. VIP tickets are $30 with early 5:45pm entry and a meet and greet and Q/A with Road Warrior Animal, as well as first and second row seats. General admission is $15 for adults and $10 for children under the age of 12. Other wrestlers scheduled to fight include: Payne, Randy Berry, and The Barbarians. More about this event will be announced shortly.