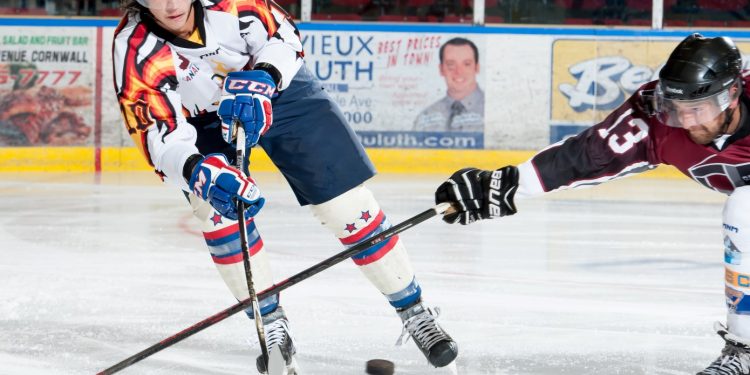 Cornwall Ontario – The River Kings completed a weekend sweep of the Laval Predateurs with a 5-3 victory on Saturday night at the Civic Complex in front of 882 fans.

With the win, Cornwall has now won each of its three pre-season contests.

Pierre-Luc O’Brien opened the scoring for Laval with a powerplay goal at 5:13 of the first.

The River Kings leveled the score at 5:36 of the second when Jonathan Joanette set up Louis-Philippe Martin. Francis Ouimet scored a breakaway goal at 8:48 of the middle frame to give Cornwall its first lead of the night – one it wouldn’t relinquish.

With only five seconds remaining in the second, Jonathan Jasper scored a beautiful breakaway goal on a backhand deke to give the River Kings a two-goal lead heading into the dressing room.

Julien Corriveau picked a corner at 8:13 of the third for the River Kings. Former Cornwall Colt Sy Nutkevitch, playing in his second pre-season game for Cornwall, picked up an assist on the goal.

Maxime Guyon scored a powerplay goal with 7:55 to play in the third and O’Brien then brought the Pradateurs to within a goal with 2:16 to play.

But that’s as close as it would get. Ouimet’s empty net goal, his second of the contest, with five seconds to play iced the victory for the River Kings, who outshot the Predateurs 36-21.

Pete Karvouniaris played the first half of the game and was replaced by Julien Giroux mid-way through the second.

On Friday night in Laval, the River Kings skated to a 7-0 victory, led by a five-point performance from defenceman Sasha Pokulok (2 goals, 3 assists). Michael Stinziani, Nicolas Larocque-Marcoux, Yan Dumontier, Julien Houle and Guillaume Parenteau also scored for Cornwall, while Ouimet chipped in a pair of assists. The River Kings had five powerplay goals on the night and outshot the Predateurs 43-38. Karvouniaris recorded the shutout in goal for Cornwall.

The River Kings wrap up their pre-season schedule next weekend with a game on Friday, Sept. 25 at Trois-Rivieres.

Season tickets are currently on sale: Adults $250; Students/Seniors $200; Children under 12 $140. Contact the River Kings office at 613-933-9797 or email info@cornwallriverkings.ca for more information.