by Editorial Board
in Press Releases
Reading Time: 2 mins read
24 1 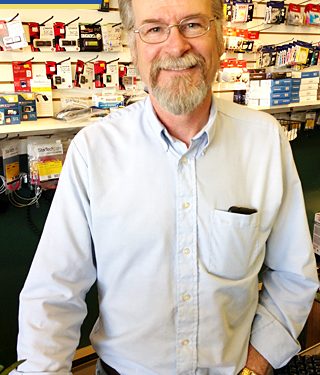 ChooseCornwall.ca – The streetscape of Downtown Cornwall is due to change soon with the retirement of John Lester, and the closure of his longtime business, J. L. Computers.

Mr. Lester first opened the doors to his iconic store in 1994. Back then Pitt Street was a pedestrian mall, and consumers were getting their feet wet with Windows 3.1.

“It was an exciting time to be in the technology business as the personal computer was becoming very popular in both offices and at home,” said Mr. Lester. “People still used floppy discs – the average computer had far less computing power than today’s smartphone.”

Mr. Lester arrived in Cornwall in 1986 after studying biochemical technology at Algonquin College in Ottawa. He was working for a computer supplies company and they asked him to establish a retail presence in Cornwall. He would move from there to work for Seaway City Electronics before opening J. L. Computers in a tiny shop on Marlborough Street. Six months later, he relocated the business to the its current location at 164 Pitt Street.

“Downtown Cornwall was in transition following a recession, and there were several vacant stores,” he recalls. “Yet there was also a strong group of local merchants and the area had potential for revitalization. Today we have a vibrant downtown with stores and restaurants that will rival anywhere.”

Mr. Lester built his business by focussing equally on consumer and business accounts. As the need for office machines and printers grew, so to did the demand for consumer electronics such as gaming computers and software.

“I’ve always said that you don’t own your customers, and that after each sale they become a free agent and can easily bring their business elsewhere,” says Mr. Lester. “I’ve had the pleasure to have some really wonderful customers, many of which who have been with me for decades.”

The loyalty of Mr. Lester’s customer base is a testament to the level of service he and his staff provides. J. L. Computers has helped hundreds of Cornwall residents navigate the everchanging word of computer technology. He has advised countless business owners on how to harness the opportunities of the Internet, and in doing so helped them remain competitive.

“The computer business continues to change, and with change comes unique challenges,” says Mr. Lester.  “Online channels have impacted the retail sale of software, product prices and margins have all dipped, and in many respects a lot of devices such as tablets and smartphones have essentially become disposable.”

Mr. Lester will be offering sale prices on much of his inventory as he winds down operations over the next several weeks. The building is also available for sale.

When the day comes to close the doors for the final time, Mr. Lester plans on (literally) riding off into the sunset. He and his wife Jane have planned to tour Canada in their BMW roadster, before returning to Cornwall.

City Invites You to Participate in an Online Open House!