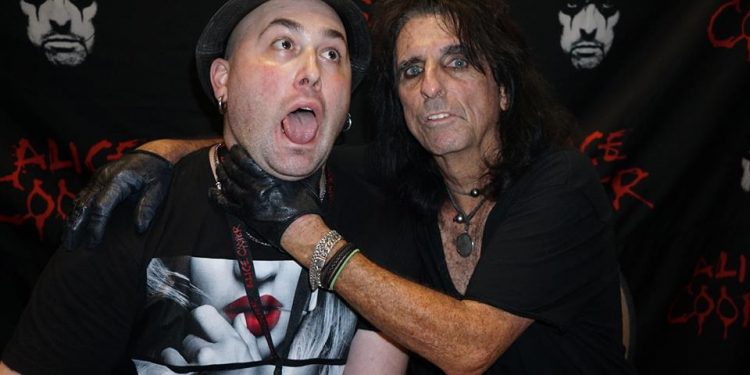 Cornwall Ontario — Local music fan Ryan Theoret had an opportunity to meet Alice Cooper in Ottawa on August 23rd. Here is Ryan’s recount of the Alice Cooper and Motley Crue concert and the backstage experience.

Alice Cooper. Shock rock. The name and genre are synonymous. Would there have been a Marilyn Manson if it weren’t for the former? Possibly, but it all starts with Cooper. The 67 year old icon opened for 80’s glam rockers Mötley Crüe with an electrifying show in the nation’s capital on August 23rd. Held at the Canadian Tire Centre, attendees ranged from parents with children under 10 to fans aged over 70. Many concert goers were dressed in 80’s attire and you better believe some of those mullets were original. You know that hair style. Business in the front and party in the back.

Cooper’s set was peppered with hits from the ’70’s that propelled the original band to fame. Billion Dollar Babies, I’m Eighteen, Under My Wheels and the latest version of School’s Out which features Pink Floyd’s Another Brick In The Wall part 2. You can find a studio cut on the latest incarnation of the Hollywood Vampires supergroup. Set to be released in September, Cooper is joined by the likes of Aerosmith’s Joe Perry and actor Johnny Depp.

If you never saw Alice Cooper before, you found out all the rumours were real. From cutting off his own head with a guillotine, singing in a straight jacket and performing with a boa constrictor around his neck, the legendary artist stayed true.

Perhaps what was most cool is how Cooper made his way through the crowd to meet up with the VIP ticket holders and actually stopped to pose for a photo with every fan who snagged him along the way.

Backstage the legend was a true comedian. While fans posed for pictures and autographs, he responded as if he was talking to the entire room. It takes a true star to make a room of 10 people or an arena of 20 thousand to feel as one.

While Mötley Crüe delivered on there final tour, it was apparent that a few fans only came for Cooper. As a fan of both artists, I was shocked to see seats beside me empty as Crüe took the stage. Such a shame as the boys from L.A. only played a handful of songs from their post 1989 catalogue.

The pyrotechnics were louder than the crew who set the stage for the Crüe. Fans were still shocked. 19,000 concert goers partied liked it were the ‘80’s all over again.