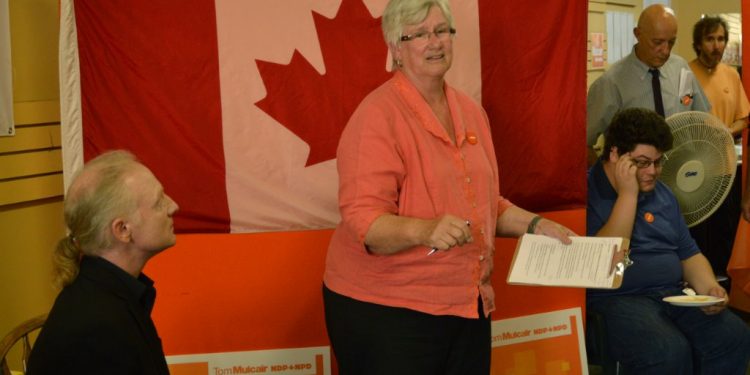 Cornwall, Ontario – Tonight was an exciting night for Patrick Burger supporters in Stormont-Dundas-South Glengarry as approximately 75 people crowded the downtown Cornwall NDP office to cheer on their candidate’s official campaign launch. Located at 262 Pitt Street, NDP supporters have been hard at work for weeks delivering lawn signs and getting the office ready for the September launch, planned well before Stephen Harper decided to call an early election.

“This campaign has been going for a month now, as you all know,” joked party organizer Elaine MacDonald to an energized crowd, before introducing Patrick Burger to the waiting supporters. “So this is more of a campaign kick-start.”

“Why are we all here tonight?” Patrick Burger asked his supporters, with some shouting the issues dearest to them. “Each one of us came through that door because we believe the NDP can win in October, and we believe that we can win this riding.”

Burger spoke to the audience about the NDP’s plan for change if elected on October 19, with applause when touching on the Senate of Canada, the Harper Government’s infamous privacy legislation, Bill C-51, and the need to improve public healthcare, pensions, and childcare.  The NDP were also joined by the Canadian Union of Postal Workers (CUPW) who were handing out ‘Save door-to-door’ signs for people to show their support for the continuation of home delivery postal service.

Local 52 President Barbara Riviere addressed the crowd, offering signs to anyone who wants one and only if they, ‘don’t have a blue one too!”

Speeches were followed by a rendition of the now trending ‘Harperman’ song, first performed by a public service worker who is no longer employed with the Federal government. Local organizers Paul Aubin and Kelsey Schmitz led the musical number on guitar and vocals respectively. National popularity of the ‘Harperman’ song will be sweeping Parliament Hill on September 17 with many of tonight’s supporters planning to attend.