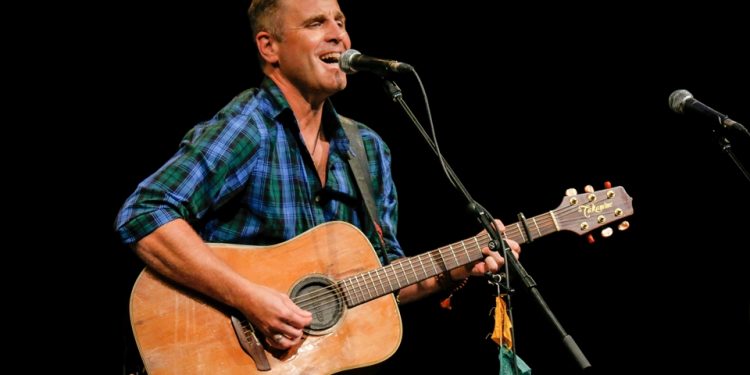 Cornwall Ontario — The setting of the show was Aultsville Theatre, a venue that sits modestly along the bank of the majestic St. Lawrence River. Hundreds of people attended Saturday night to see Sean McCann of Great Big Sea and Graham Greer of the Barstool Prophets perform live in concert.

The audience applauded with earnest exultation as Greer entered the stage.

Graham played the strings on his guitar and he played the audience’s heartstrings equally well with the successful juxtaposition of sentimental themes contrasted with witty humour.

“The concert was amazing. Graham’s performance was outstanding, energetic and emotional at times”, said master of ceremonies Sue Stewart.

Greer played some new songs, some fan favourite tracks, and a Barstool Prophets tune too.

Next on stage was Sean McCann who received a great big Seaway welcome as he entered the stage.

He commenced his set with a marvelous a cappella. His voice soared like a bird vigorously flying over a mountain top.

“The echo of Sean’s opening song sent shivers down my spine. It was entertaining yet very intimate. The finale was the best when the pair got to reminiscing and performing each other’s band tunes from back in the day”, observed Stewart.

McCann and Greer have a good rapport and share a little bit of musical history together. In the mid-1990s it was Great Big Sea opening for the Barstool Prophets.

Their chemistry and experience helped to create memorable magic on stage, and the audience applauded with adoring approval.

“Both Sean and I commented on the incredible audience response – it was exhilarating! What a pleasure!”, Greer recollected.

Despite having throat surgery in July, Sean McCann sang with strength.

“I thought Sean’s delivery was personable and he looked extremely comfortable up there. He was nervous about his voice, having just had throat surgery back in July, but I thought he was in top form. Such a great guy”, remarked Greer.

Bravo to McCann and Greer on a breathtaking show.

“I think I am in love with Cornwall and I can’t wait to see her again”, says Sean McCann.

Here is Jason Setnyk’s interview with Sean McCann that was published last week in The Seeker.

1 – What was your fondest memory during your twenty years as a member of Great Big Sea?
My fondest memories are all from the very early days when it was just the 4 of us (with Darrell Power on bass) and we did everything by ourselves. We didn’t have an agent or a manager or a label, but we were still a force to be reckoned with. I am very proud of what we were able to accomplish when we were all working together towards the same goal.

2 – How is the recording process different post-GBS? What was it like working with Joel Plaskett who produced your debut album? How do these recordings better represent who you are / your vision / your message?
In my 20 years and 11 studio recordings with Great Big Sea, not one track was ever recorded “live off the floor” which is a shame because we were a great live band. Joel’s process was completely the opposite. Every Song was recorded live without digital assistance and immediately committed to 2 inch analog tape. There was no “Auto Tune” button. I was forced as an Artist to remain completely open and focused which is how I am trying to live my life today.

3 – How did growing up in St. John’s Newfoundland influence your music?
St. John’s is the New Orleans of Canada. It is made of music and liquor and my music was forged in that fire.

4 – In an interview with CBC you described some life changes, such as quitting drinking. How else has your life changed post-GBS? Have you found what you are looking for in life or is it an on going journey?
I am still looking and I have come to embrace the truth that I always will be. At least now I am wide awake so I can see where I am going and I am open and unafraid of whatever might be next.

5 – What can music fans expect from your show September 19th at Aultsville Theatre in Cornwall?
Fans can expect to experience a much lighter “me”. I am doing “the work” and am reconnecting with the world in a far more meaningful way. And I love my job.

Thank you for the interview Sean McCann.
Thank you Jason.