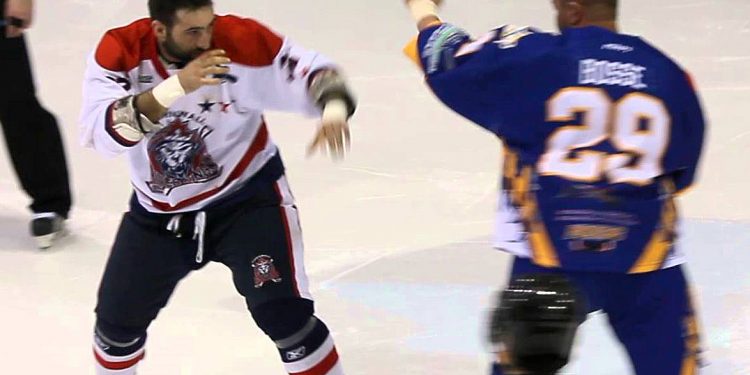 Cornwall Ontario – With the River Kings regular season home opener a month away, the team has come to terms with a fan favourite.

Veteran enforcer Curtis Tidball will return to Cornwall for his 10th LNAH season. The 31-year-old from Cap-Sante, QC, obviously liked what he saw with the River Kings late last season.

“I’m really happy to be coming back to Cornwall; the ownership is a big part of it,” said Tidball, who calls Steve Moreau, along with Stephane Bourque of Thetford-Mines, the best owner in the league.

While Tidball has played for his share of ownership groups over the years, the Moreau family has certainly earned his respect.

“Steve is a down to earth person and he makes the time to talk to you,” said Tidball. “He always comes through with what he says he will do.”

Tidball is expected to take on a bigger a role with the River Kings this season according to Head Coach and General Manager Rick Lalonde. And the veteran forward believes Cornwall will build on a great playoff series vs. Sorel-Tracy.

“We have a strong, hard working group and I think we can move forward this year, especially with Rick’s experience behind the bench,” said Tidball. “Rick understands the game very well and he understands different player’s roles.”

“Curtis is healthy and he is fearless,” said Lalonde. “He’s a tough customer and won’t back down from anyone in this league.”

Tidball, who went to the Memorial Cup in 2003 with the Quebec Remparts, has played in 302 career LNAH games, earning a whopping 2,147 penalty minutes. He’s added 363 penalty minutes in 52 career playoff games.

How does a hard-nosed player like Tidball last 10 years in the LNAH?

“I just love the game of hockey,” said Tidball, who last season, coached his son’s minor hockey team. “It was the most fun I ever had in hockey.”

PRE-SEASON: On Saturday, Cornwall hosts Sorel-Tracy in pre-season action at the Civic Complex. Tickets are only $5 (all ages, general admission). Season ticket holders will be admitted to the game at no charge. Cornwall’s second and final pre-season game on home ice is Saturday, Sept. 19 vs. Laval.

HOME OPENER: The River Kings welcome Riviere-du-Loup to town for their first regular-season contest of the 2015-16 season on Saturday, Oct. 10. Game time is 7:30 p.m.

TRANSACTION: The River Kings have acquired the rights to defenceman C.J. Chartrain from Laval for a 5th round draft pick in 2016. The 25-year-old from Pointe-Claire, QC, played in the ECHL last season. In 2014-15, Chartrain had nine points and 69 penalty minutes in 49 games with the Gwinnett Gladiators.

Agree to disagree : To vote or not to vote