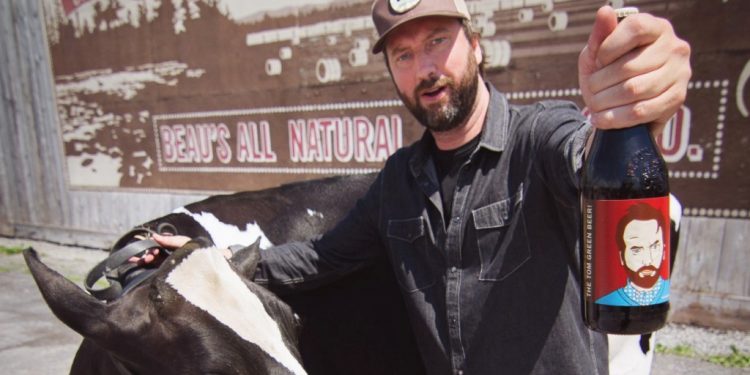 Last year’s event hosted more than 19,000 festival-goers over the two days, and raised $106,000 for local community groups and a number of charities.

“We work year-round on planning Oktoberfest, so when this time of year rolls around we get pretty excited about opening the gates,” says Beau’s co-founder Steve Beauchesne.

“Last year we expanded the festival footprint significantly, and it just gave all the fun a bit more room to breathe. People loved how they could totally personalize their Oktoberfest experience, and yet how it still totally gels at the same time,” he adds.

There is a lot of exciting entertainment at this years festival including comedian and actor Tom Green who will be performing for the Oktoberfest crowd. Tom Green has been in films such as Freddy Got Fingered, Road Trip, Stealing Harvard and Charlie’s Angels. Green had a short-lived marriage to actress Drew Barrymore who also starred in Charlie’s Angles. He also hosted The Tom Green Show on MTV.

Friday’s music line up is headlined by Yukon Blonde in a roster that also includes The Dears, The Pack A.D. and The Elwins. Indie pop act Alvvays will perform in the headliner slot Saturday evening, following performances from musical guests F****d Up and The Beaches. Walter Ostanek returns to delight with his traditional Bavarian
music both Friday and Saturday during the daytime. A second music stage dubbed “Black Forest” will also run during the day, with Powernap headlining Friday, and The Flatliners headlining Saturday.

A total of 14 Beau’s beers on tap, including 5 brand-new beers. There will also be 28 local restaurants bringing their best Bavarian and seasonally-inspired cuisine. There are lots of activities including the keg toss, a sausage-eating contest, malt sack races, partner-carrying race, and more. There will also be a midway, traditional German dancing and entertainment, a skateboaring demo area, and a Kinderfest area with family activities and entertainment. Plus mre.

This year the VKH Oktoberfest will raise money to support the Canadian Cancer Society and the Hawkesbury and District General Hospital Foundation, as well as the Vankleek Hill Agricultural Society, 100% Actifs, For Pivot’s Sake, Hidden Harvest, Ottawa Riverkeeper, Ottawa Skateboard Community Association, Sasha’s Park, and
United Way’s All That Kids Can Be. With the $106,000 raised in 2014, Beau’s Brewery brought their six-year Oktoberfest fundraising total to $348,000.

Adult admission to the festival is $27 taxes in; 2-day passes are $39.50, and kids passes (18 and under) are $5. The ticket includes a voucher for your first beer or other beverage, and the first 2,000 people through the gate each day will receive a souvenir alpine hat. As in previous years round-trip bus transportation is available from Ottawa, Cornwall and Montreal, at a cost of $15 per day. Tickets are available now for purchase online today, starting at 10 am, at www.beausoktoberfest.ca.