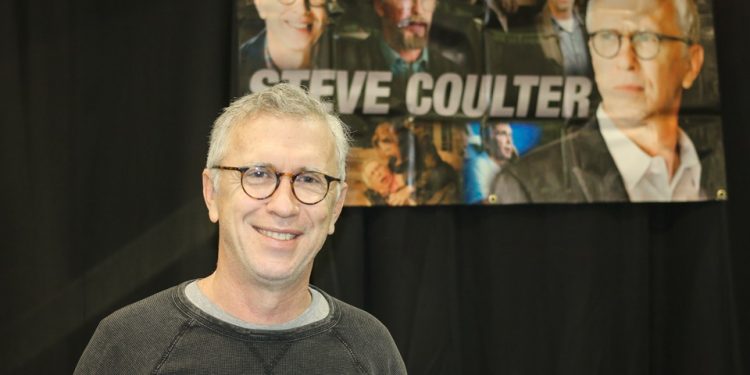 Cornwall Ontario — Actor Steve Coulter, who was born in Montreal and lived in Beaconsfield, is scheduled to appear at the next Cornwall and Area Pop Event. The second annual CAPE takes place on April 23rd and April 24th 2016 at the Benson Centre.

Coulter recently appeared in Season 5 of AMC’s the Walking Dead. He played the character of Reg Monroe – a member of the Alexandria Safe-Zone, husband of Denna, and a Professor of Architecture who helped construct the fence around the community.

Coulter, who is a graduate of the North Carolina School of Arts, has an impressive resume both in films and on television.

He has appeared in many movies including The Hunger Games, Furious 7, Insidious: Chapter 2 and Chapter 3, the Conjuring, and in Anchorman 2.

Coulter has also appeared along side Robert Duvall in Billy Bob Thorton’s movie Jayne Mansfield’s Car, along side Denzel Washington in Flight, and in Angus MacLachlan’s film Goodbye To All That.

He has also had television roles on Prison Break, One Tree Hill, and Dawson’s Creek.

Coulter can also be seen regularly on the HBO series Banshee.

Later this year Steve Coulter is going to appear with Tom Cruise in Mena, with Mickey Rourke in Ashby, and with Michael Keaton in the Founder.

I think that characters like Reg and Hershel appear on the show to bring some light to that very dark world.  On a purely practical level, I believe the creators and writers understand that the audience needs a break from the relentless tone of gloom and hopelessness.  These characters are important to the show because it gives the audience and the other characters in the story reminders of the goodness and hope that is possible in that world.  However, we all know that guys like Hershel, Dale, Noah, and Reg pretty much have a big fat bull’s-eye on their backs as soon as they show up.

Unfortunately, I didn’t get to work with Philip Seymour Hoffman, but I did get to meet and talk to Paul Walker.  What struck me immediately was how friendly and welcoming he was.  Most notably, during breaks in filming, he didn’t scoot off to his trailer or sit huddled over his cell phone, like so many actors tend to do on a set.  He just hung out and chatted with folks.  I got the sense that he didn’t take himself too seriously, and that he really loved making movies.

3 – You have appeared in many films and television shows. Do you have a favourite role you played or a favourite scene?

I think one of my favourite scenes had to be one I shot with Mickey Rourke, for the film, Ashby.  (Spoiler alert coming up).  In the film, Mickey plays an ex-hitman for the CIA, and my character, an old friend, betrayed him and used Mickey’s character, Ashby, to kill an innocent man.  Ashby comes to my house for payback, to kill me.  Getting to work with him was a lifelong goal.  He’s one of those actors, Like Robert DeNiro and Al Pacino, that I grew up watching.  And to go toe-to-toe with him in a really cool scene was a dream come true.  Although the dialogue stayed the same, each take was different.  We’d throw different things at each other and it was exhilarating.  In the late afternoon, we were shooting his close-ups, right before he shoots me (there’s that spoiler alert), and I wasn’t mic’d, so I realized I could say whatever I wanted.  In the scene, my character is being pretty defensive and non-threatening.  Mickey had a line, “You used me”, that he usually said threateningly.  But on this one take, he said it fairly meekly.  So, instead of my written line, which was “C’mon, Ash…”, I looked him straight in the eye and said, “F— you.”  His eyes turned absolutely cold and murderous.  I was a little worried as to how Mickey would react to throwing him that curveball, but as soon as the take was done, he gave me a big hug and said, “Thanks, man…that was cool.”

I think my favourite role was a character I played in a small film I did for PBS, called The People vs. Leo Frank.  It was a huge challenge because the character I played is prosecuting an innocent man.  The film is based on the true story of the railroading and lynching of Leo Frank.  I had to justify going after this poor man, and there were several very dramatic courtroom scenes which were awfully fun to sink my teeth into.

Despite being a talented and experienced actor, has there been a character you played or scene you acted that was especially challenging and difficult? Please elaborate.

I just finished shooting The Wizard of Lies, an HBO film starring Robert DeNiro as Bernie Madoff, the investor who swindled thousands of people out of over $60 million. I play a real life character, Martin London, who was a family friend.  In one scene, I discover the body of Madoff’s son, who has hung himself in the hallway of their home.  I had to walk past his body and go to the bedroom to get his 2-year-old son, and also somehow corral the family dog as well.  Logistically, it was very tricky, and also dealing with the horror and sadness of the scene while getting all those things done.

4 – At Comic festivals you get to meet fans and even young aspiring actors. What has been your experience attending events like this?

The conventions have been a very new experience for me, and have been absolutely delightful.  It’s very humbling to get to meet so many extraordinarily kind fans who have taken the time to come out to these events.  It’s a bit odd, in that so many people come up and offer their condolences for my “death” as Reg on The Walking Dead.  It just amazes me that there are so many fans from all over the world.  I really enjoy getting to talk to young people, in particular.  They often come up and ask for advice about pursuing acting or their dreams.  I just tell them to work harder than anyone else, be kind to everyone you meet and work with, and don’t forget to have fun following their dream.

b) What have you learned about the entertainment industry by meeting and interacting with moviegoers in a more personal setting face to face?

You realize what a responsibility you have.  The moviegoers and television viewers have let you into their homes, or they’ve paid a chunk of money to go out to the movie theater to see your film. What I always remind myself is that everything you do is for an audience who has come to see a story.  And we’re all obligated to do the very best job we can to tell that story truthfully.  To do it – not to impress the director or other actors, or to further your career – to pull that audience into the story and take them away.

5 – You are going to appear with Tom Cruise in Mena, with Mickey Rourke in Ashby, and with Michael Keaton in the Founder. Without any spoilers, can you tell us a bit about the characters you are going to be playing in these upcoming movies, and/or any interesting stories on set?

These days, movies are extremely strict about releasing any information about a project, and actors sign non-disclosure agreements. I can say that Mickey Rourke is an actor’s actor.  He’s willing to do whatever it takes to get a scene where it needs to be.  Before one of the scenes, he had them play a Bruce Springsteen song right before the cameras started rolling, to get him into the spirit of the opening of the scene.  It helped me a lot, too.  Tom Cruise is a work horse.  He is totally involved in every facet of the film, and is on set all the time, even when he’s not shooting.  A pretty regular guy, who doesn’t walk around like a movie star. My scenes in The Founder weren’t with Michael Keaton, but I did get to work with Nick Offerman (from Parks & Recreation).  He’s one of the kindest and funniest guys you could ever meet.  One last anecdote, from when I was shooting Insidious 2 with Patrick Wilson.  The two of us were behind a red door, about to open it and walk into “The Further”, a fog-filled place representing the afterlife in the film.  The fog machine was going full tilt, and we were gearing up to make our entrance.  Right as the cameras started to roll, and before the director called “action”, Patrick turned to me, smiled, and whispered, “Isn’t this a great job?”.  It really is.

Thank you for the interview Steve Coulter.

More about CAPE 2016: Steve Coulter will not be the only Walking Dead cast member at this years CAPE. Three zombie actors were announced a few weeks ago – Jeremy Ambler, Coleman Youmans, and Chris Harrelson.

Other celebrity guest include Brian O’Halloran who starred in Kevin Smith’s Clerks and in the sequel Clerks II as the character of Dante (famous for the catch phrase “I wasn’t even supposed to be here today”). He has also appeared in other Kevin Smith films such as Dogma, Chasing Amy, Mallrats, and Jay and Silent Bob Strike Back. Clerks actress Marilyn Ghigliotti and Clerks actor Scott Schiaffo will also be attending.

Star Trek and Buffy the Vampire Slayer actress Noelle Hannibal will be beaming up to CAPE just in time to celebrate Star Trek’s 50th Anniversary.

Award winning comic book artist Dan Parent, best known for his work in Archie Comics, was announced as a guest at CAPE earlier this week.