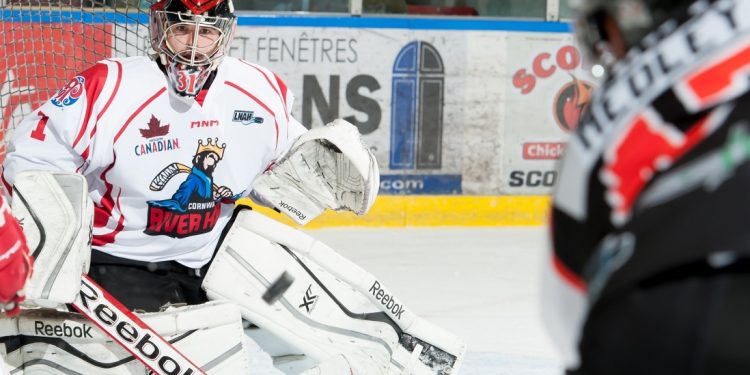 Cornwall Ontario– The River Kings powered past the defending LNAH champion Thetford Assurancia 4-2 on Sunday afternoon at the Civic Complex in front of 791 fans.

Charles Lavigne, with a 48-save performance, was the difference for Cornwall. The River Kings powerplay was sharp, connecting for three goals on the afternoon.

Cornwall took the lead back early in the second when Sy Nutkevitch took advantage of a turnover behind the Thetford net and beat Gabriel Girard 38 seconds into the middle frame.

Antony Courcelles banged in a loose puck in the crease for a powerplay goal at 6:19 of the second before J.P. Caron finished off a pretty passing play at 12:59 for another goal with the man advantage. The Caron marker, from the high slot, chased Girard from the game.

Stephane Boileau scored a wraparound goal with 8:42 to play in the contest to bring Thetford to within two goals.

The game featured a spirited bout, as Curtis Tidball of the River Kings dropped the mitts with Ryan Hand of the Assurancia early in the second.

Thetford outshot Cornwall 50-36 on the afternoon. Lavigne (first), Caron (second) and Nutkevich were the announced stars.