by Editorial Board
in News and Announcements
Reading Time: 1 min read
24 2 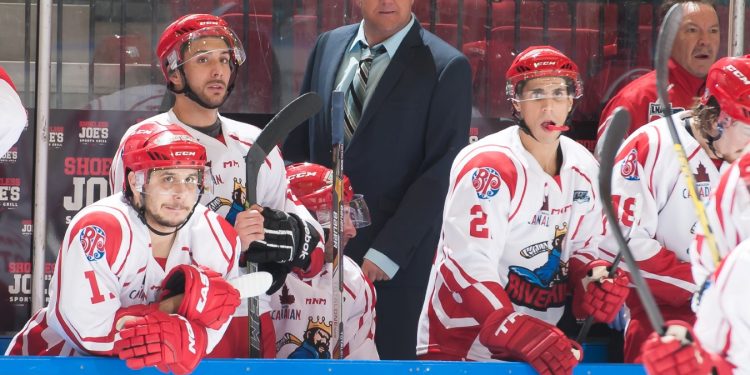 CORNWALL – The River Kings will have a new look when they take to the ice this weekend in LNAH action.

Newly acquired defencemen Jonathan Parisien and William Lacasse will be in the lineup for Cornwall along with Guillaume Veilleux, who signed as a free agent last week.

And up front, set to make his River Kings debut, will be the rugged Maxime Vachon, acquired earlier this week, along with a 1st round pick, for injured defecemen Sasha Pokulok.

“With Parisien, Lacasse and Veilleux, we are going to have stability on the back end,” said Desjardins. “And Vachon gives us that grit up front that we didn’t have before.”

Lacasse made his River Kings debut last Saturday at the Civic Complex, picking up two assists. He was named the game’s second star. Parisien, who had five points in 13 games with Jonquiere, will also suit up this weekend.

And finally, Veilleux will see his first action with the River Kings. The 6-foot-1, 205 lb. defenceman, who has five years and 143 games of experience in the LNAH, has been suiting up for Saint-Ephrem in the Ligue de Hockey Beauce Bellechasse Frontenac in Quebec, picking up eight assists and 27 penalty minutes in 15 games.

LNAH teams travelling to Cornwall won’t come away with an easy two points according to the bench boss.

“We are going to play the hockey that I love, with intensity and passion,” said Desjardins.

The River Kings travel to Laval on Friday night to take on the Predateurs. The following night, at the Civic Complex, Cornwall hosts St-Georges. The puck drops at 7:30 p.m.