by Khyle
in News and Announcements
Reading Time: 2 mins read
29 0 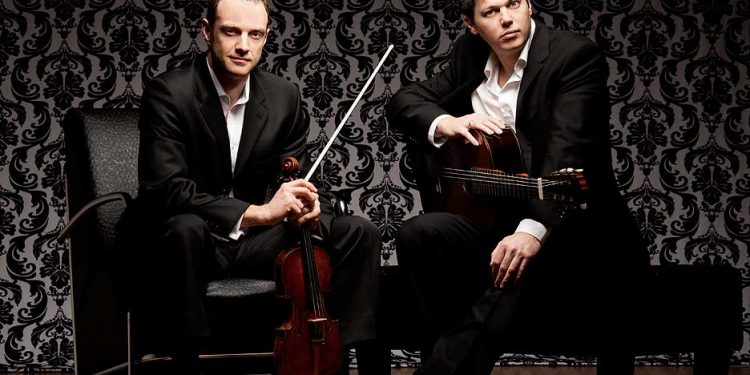 – Two leading Canadian performers, violinist Jasper Wood and guitarist Daniel Bolshoy, unite as Duo Rendezvous in a performance at  Aultsville Theatre on Saturday, April 16, 2016 at 8:00 pm.  Their unique programming enriches the existing guitar and violin repertoire with transcriptions of masterpieces from around the world.  Both Wood and Bolshoy have thriving solo careers and have a reputation as charismatic virtuosi who enjoy engaging their audiences with humour and passionate musicianship.

Jasper Wood has established himself as a major talent of his generation.  He made his first public appearance at the age of five, and has since captured the hearts of music lovers everywhere with his “thrilling virtuosity” (the Strad) and his “sweet tunefulness edged with melancholy” (Washington Post). An acclaimed competition winner, Wood has developed a flourishing reputation as a sought-after soloist with major orchestras including Canada’s Montreal and Toronto Symphonies and as a recital/chamber musician throughout North America and Europe.  Mr. Wood has eight solo and violin/piano recordings, and is professor of violin at the University of British Columbia.

Having performed hundreds of concerts internationally, Daniel Bolshoy is recognized as a leader amongst Canadian guitarists.  An ATMA recording artist, Daniel Bolshoy appears on seven CD recordings and in two documentary films.  A true ambassador for the arts, Daniel Bolshoy’s performances take him from the most prestigious stages, where audiences are captured by his skill, charm, and uniquely communicative stage presence.  He is regularly invited to appear with orchestras and concert societies across North America, Europe, the Middle East and Asia. A devoted music educator, Daniel Bolshoy is currently head of the guitar division at the University of British Columbia and head of the guitar department at Vancouver Symphony Orchestra’s newly created VSO School of Music, where he shares his passion for music with the next generation of guitar enthusiasts and tomorrow’s guitar heroes.

The 2015 North American Brass Band Champions, Weston Silver Band end the Concert Series’ season on May 7, 2016 with their popular programme Songs of the British Isles.

Single tickets ($30) for all performances may be purchased in advance (cash or cheque) at these locations: TD Canada Trust, Cornwall Square; Caisse populaire de Cornwall, 840 Pitt Street; and at the Cornwall and the Counties Tourism, 691 Brookdale Ave, Unit E.  Single tickets may also be purchased at the door on the evening of the performance. For further information, visit www.CornwallConcertSeries.com.