by Khyle
in News and Announcements
Reading Time: 2 mins read
137 7 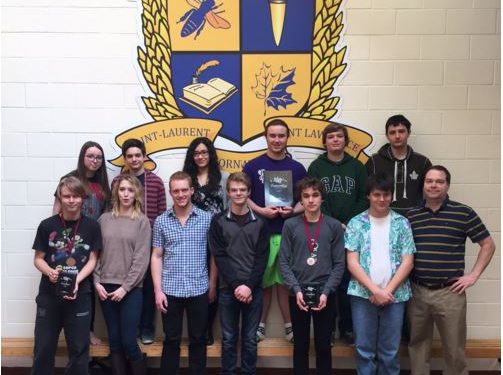 (Cornwall) – Two teams from St. Lawrence Secondary School
(SLSS) picked up a total of five awards over the weekend at the Sears Seaway District Drama Festival.

The team that performed Mere Mortals will now advance to the Sears East Regional Drama Festival in Ottawa on April 11-16 at Woodroffe High School.

Merizzi said he was thrilled at both teams’ success.

“This is the fifth year in a row our school will be advancing to the Sears East Regional Drama Festival,” said Merizzi. “It really all came down to the students’ commitment, dedication and perseverance in the last two months that allowed them to see their plays come to life.”

Danny, King of the Basement is a Canadian play written by David S. Craig. The play, set in Toronto, is a comedic drama and details the life of a young teenager named Danny Carter as he struggles with poverty, hunger and homelessness. ​The second SLSS entry, Mere Mortals, is written by David Ives. In the production, the audience listens in on the lunch-hour conversation of three construction workers, revealing some amazing secrets about their past.

The Russell High School production of Death of Me also picked up three awards at the festival. Students Rachel Hunter and Ross McIntyre each won individual awards of merit for their performances, and the show won an award of excellence for the cast and crew.