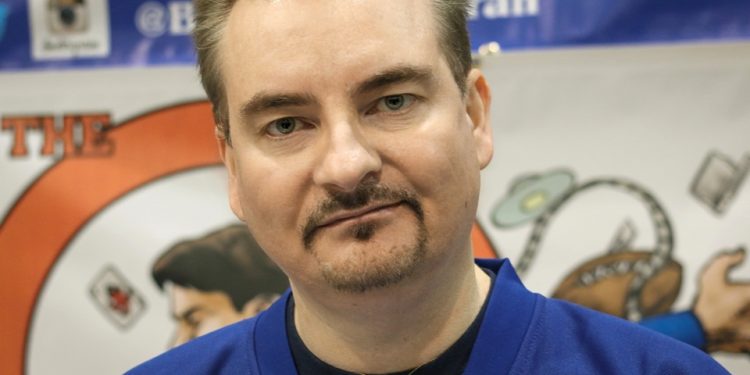 Cornwall Ontario — Actor Brian O’Halloran was one of the many celebrity guests at the Cornwall & Area Pop Event this weekend. He has an impressive resume of movies to his name including Clerks, Mallrats, Chasing Amy, Dogma, Jay and Silent Bob Strike Back, and of course Clerks 2 reprising his role as Dante Hicks.

Brian O’Halloran, who was sporting a New York Rangers uniform, talked to many fans on Saturday and Sunday. He even took the time to do an interview with this newspaper.

What’s next for Brian O’Halloran? He has a busy schedule coming up with the production of Mallrats 2 and Clerks 3.

Many of the movies Brian O’Halloran has worked on have been directed by Kevin Smith. He has personally seen Smith grow and develop as a director first hand over 23 years.

“Since knowing Kevin (Smith) in 1993 and working with him he has grown tremendously as a writer. He has been pretty consistent about how funny he is with his dialogue especially. His directional skills have gotten even better and he’s been able to direct a episode of the CW’s Flash.

In front of the camera Brian O’Halloran also grew and developed (as an actor), but he stays humble.

“As far as me as an actor, I watch myself, and I know there is room for improvement. It’s the embodiment of the character I play for Kevin. He writes so naturalistic”.

For Brian O’Halloran, being at conventions is fun, even if he hears his famous Clerks catch phrase all the time.

“There are many things people say to me like ‘are you suppose to be here today’. It doesn’t bother me at all. I’ve been blessed to be in a bunch of films with some amazing writing. It’s a simple way to remember my character. I’m not going to get all Gary Coleman and get angry and say whatcha talkin’ bout? I’m actually really blessed”.

Brian O’Halloran heard good things about CAPE from Ming Chen of AMC’s Comic Book Men. He was a guest at CAPE last year.

“I know Ming Chen and Mike Zapcic from Comic Book Men were at CAPE last year. As a matter of fact Ming texted me just before I got here saying they had a blast and these people take care of you and it’s a really fun town to hang out in. Seeing the location, with the two arenas here, it is a really nice place. All the fans are really friendly here. I would definitely come back (to Cornwall). I’m having a fun time. Everyone at CAPE has been really great”.

Marilyn Ghigliotti and Ernie O’Donnell, who also appeared in the Kevin Smith movie Clerks, were celebrity guest in attendance.

For more information on the event visit: http://www.cornwallpopevent.com/