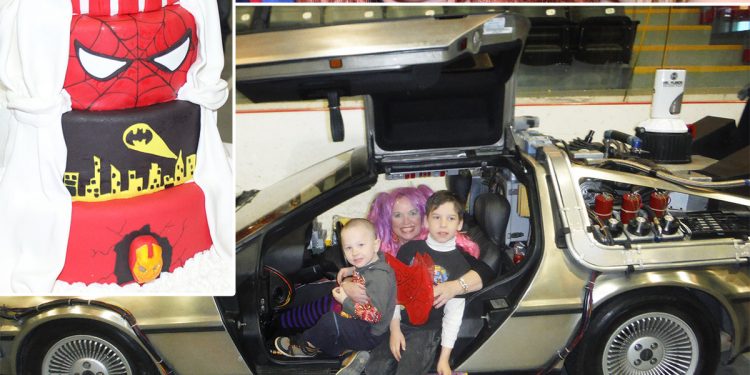 Marlene says The Cornwall and Area Pop Exhibition (CAPE) brought in close to 6000 people last weekend. This was the second year of CAPE, and it was a two day event this time around. As exhibitors, John and I began setting up our display on Friday evening, and got the green screen and computer equipment up and tested with our camera. We arrived early the next morning to do some final testing before the doors officially opened at 10:00 a.m. The public began coming in slower than last year, which gave us a chance to speak to people and invite them over for an instant photo. I remember from last year that there was more of a crowd that came through at first, which then died down slowly as the day went on. But this year, it was nice and steady pretty much throughout the day.

The organizers, Randy Sauve and Carol Grant were married on the Saturday evening, and we were invited to be one of several photographers taking wedding photos. It was quite a unique wedding, with Darth Vador walking the bride-to-be up the aisle, R2D2 giving the ring to Randy’s grandson Grayson, and Ace Ventura pretending to have an objection to the wedding taking place. I had never seen a wedding with a cosplay theme like this, and it was pretty amazing to behold. On Sunday, people once more began arriving at 10:00 when the doors opened, and it seemed brisk all day long until about 4:00. Since ~CAPE~ was finished at 5:00, this seemed about right, as it was getting a bit late for new arrivals.

Although John and I offered “green screen photography”, with your choice of background, edited and printed on a high quality postcard for just five dollars, we still made money due to the large number of cosplayers who came through and had their photo taken by us. We also made even more connections with local and not-so-local people in the business, and fondly greeted those we had met at the previous ~CAPE~ who had returned from out of town.

Jason Setnyk of ~The Seeker~ took lots of photos, including one of us with a cosplayer (as Jack Sparrow)at our green screen. We edited it into a final image, and share it here. I think it may be the first collaboration between any Cornwall photographers, but it was an opportunity waiting to happen, since Jason took the photo of us in front of our green screen … it begged to be completed by us.

John and I truly enjoyed the experience of ~CAPE~, as we had the year before, and got to meet many famous, and not-yet- so -famous people. We also got to see (and I got to sit in) the DeLorean from ”Back to the Future”, the ambulance from ‘Ghostbusters’ and even Kitt, the car from ”Knight Rider”, all former movies or TV series’. Plenty of professional cosplayers were on hand too, as well as book authors, cartoonists, artists, and many other creative types. Merchandise of all kinds was available too, from comic books to magic wands, jewelry, books, and so much more. There was certainly something for everyone in attendance, no matter where your tastes in Comic or Pop culture lay.

Everyone that John and I spoke with were delighted and very positive, as this event was Fantastic, and it left the public in a happy state of mind.. One of my favourite guests, Ace Ventura, a young man from Montreal by the real name of Simon Fontaine, left a trail of laughter and joy wherever he went. He was loud, and funny, and impossible to ignore, making everyone in his path smile. Many of Cornwall’s hotels, motels and restaurants benefitted from the people in from out of town, as the city was bustling with many added people over the weekend. All thanks to ~CAPE’s~ Organizers, Randy & Carol Sauve and All of their VOLUNTEERS!!!

The overall feeling of this Special Pop Event was extremely positive, and many people are now already looking forward to ~CAPE 2017!!! SEE YOU NEXT YEAR!!! P.S. Read more about what went on at ~CAPE~ in my column on page 11.

Hello there to all of you beautiful and handsome people reading the most positive paper in the Cornwall and the S. D. & G. area. What a wild and crazy kind of week with all of these different types of weather thrown at us… Sunshine, Rain, Drizzle, and even a mini Snow Storm thrown into the mix on Tuesday morning!!! COME ON NOW MOTHER NATURE GIVE US A BREAK, ALREADY!!! Despite this crazy weather, the multi-coloured crocuses & tulips and the pretty, yellow and white daffodills are shooting up their pretty faces towards the warm sunshine, to show off this year’s Spring colours. My, How I Love Seeing All Of The Signs Of Spring!!! Do make sure to get Out & About to observe, touch and even smell all of these different small miracles that Spring brings back each and every year. Make sure to bring along a friend or family member to accompany you on your “Spring Walk About.” It makes the experience a little more better and much more funner when you are sharing it with somebody else. Spring Is In The Air!!!

Item of the Week: This week I have chosen a pair of hand-made, wooden book ends. They look like wee wizards from ~The Lord of the Rings~. I bought them for John from ~Value Village~ for ONLY $6.99!!! Where else could you get something so unique like this for such a cheap price??? Do make sure to check out our local thrift stores for your very own treasures and unique items. Happy Shopping!!!

John Lister and I, of www.photodreams.ca, were at the BIG ~CAPE~ event held at the ~Benson Centre~ last weekend. We set up our 20 ft. green screen and had several backgrounds for the patrons in costume (or not) to choose from. All they had to do was stand behind the orange line and SMILE for me as I counted down from 5, 4, 3, 2, 1… then *CLICK* their photo was taken!!! Within a minute, an INSTANT PHOTO was made from our ~Photo Dreams~ software to have as a keepsake. I even got to wear three different costumes throughout the weekend. The Co-ordinators (Randy & Carol Sauve) are estimating that nearly 6,000 people came through the doors from Cornwall, Kingston, Montreal, the 1,000 Islands and many other parts of Ontario. They got to see all kinds of Sci-fi & Anime people, creatures, weapons and even some cool vehicles, like “The DeLorian,” from the movie, “Back To The Future” and “Kitt” from the t.v. series, “Night Rider,” as well as the Ghostbusters’ vehicle.

This year, several of the “Star Trek” members attended ~CAPE~ that were from the original televison series. They were, and still are, celebrating their 50th year since the series began in the 1960’s!!! (When I was born.) I not only got to see them, but Ms. Sally Kellerman who played Dr. Elizabeth Dehner and Major Margaret “Hot Lips” O’Houlihan in the 1970 smash hit M*A*S*H* was at my booth chatting with my granddaughter Abigail and I about the crocheted toys, ~Look -A-Likes~ that her and her mother, Melinda had made so that she could have some spending money at ~CAPE~. It was quite a thrill for me to talk to her and I was “star-stunned” and couldn’t bring myself to ask if she minded taking a photo with me. But later on that afternoon I hugged Ms. Kellerman and told her that she was one of my favorite stars on “Star Trek”. I didn’t get to have my photo taken with her, but I feel that personally talking and getting to hug her were much more priceless. Live Long & Prosper!!!

Many other personalities such as Ace Ventura, “Chewy” from Star Wars and even some of the Storm Troopers were stomping around like real Space Soldiers. The Ghost Busters, Wolverine and The X-Men from Montreal were there for all to see and chat with as well. There were all kinds of venders selling their wares over the two day event… from knitted hats & scarves, to hand-painted or hand drawn pictures and lots of posters and toys of all kinds to choose from. There were all kinds of crafts, such as hand-made wooden jewlery, to butterflies and dragonflies that were encased in some kind of “plastic coating” to show off their beautiful colours and to make them last forever. Lots of different authors of novels and comics were selling their books and there were even some designers of Steam Punk clothing and accessories on hand, (if you were into that kind of stuff… like me). All in all, it was a perfect weekend to get your CAPE ON!!! Even Mother Nature was co-operative and gave us a cool, but sun-shiny weekend to enjoy.

I feel the best part of this weekend goes to the “COOLEST WEDDING” that John and I, and perhaps many others had ever attended. Randy & Carol got married with a crowd of 2 to 300 people attending their special nuptuals. Darth Vader gave the Bride- To- Be away, R2D2 gave Grayson, (Randy’s grandson) the ring, and Ace Ventura was the only one to object to the couple getting married. He, (Simon Fontaine of Montreal) was rather funny and he made everyone around him literally LOL, and SMILE from ear to ear. Their FABULOUS wedding cake was made right here in Cornwall by ~Fairy Sweet Chocolate~. John and I heard a lot of positive feedback from many of the venders, the public and even the guests that attended this year. Thank you Randy & Carol for all of the many long hours and all of the hard work you both put in to make this “Incredible Event” possible. I also want to give a HUGE THANKS to ALL of the VOLUNTEERS who helped out this year. Without all of your dedicated help and time ~CAPE~ wouldn’t have run so Successfully or so Smoothly. John & I, the many Vendors, the Guests and all of the Patrons look forward to attending ~CAPE 2017~!!!

Family News: My eldest and firstborn, Melinda, turned the BIG 36, yesterday!!! My dear daughter, we have gone through a lot of Ups & Downs throughout the many years together. You were the one to give me my first grandson and granddaughter. You were there when I needed love and somewhere to live. You were there with me throughout our growing up years. You helped me out so much in the rearing of the other six children. I thank you from the bottom of my heart for all that you have done and will do for me in the future. I look forward to the upcoming years having fun with you and your four beautiful children. I hope that you liked your gifts and that you enjoyed your “Special Day” with me and the rest of the family. Love Always & Foreverly, Mom

Until Next Week: You know we get so worried about being Pretty…Let’s Be Pretty Kind, Pretty Funny, Pretty Smart and most of all, Pretty Strong!!! I Say,” The Women That Smile, Are The Prettiest!!!” Just Sayin’

Supporting a Loved One