FROM MY PANTRY: Two Simple Dishes 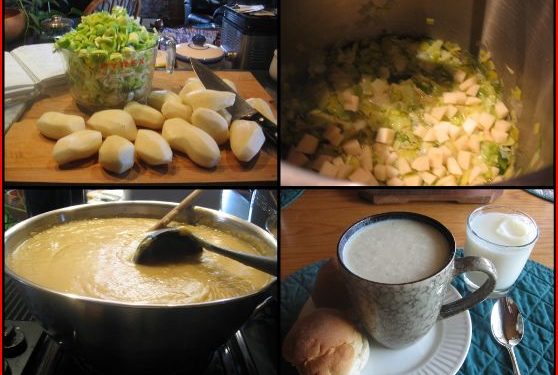 FOR BIGGER AND REDDER TOMATOES: Use 2 tbsp. of our specially priced skim milk powder in each deep hole as you plant your tomato plants. The milk powder acts as calcium to feed the tomato plants. Add a tbsp. of our natural wheat bran as well to prevent cutworms. When they eat the bran, they will explode! These little tricks will give you the best tomatoes ever! Even if you have already planted your tomatoes, do them a favour and add some of the milk powder and bran by just digging carefully down alongside the stem and sprinkling in some milk powder and bran.

MAKE SOME POTATO AND LEEK SOUP

I know that I am not alone in this. Ladies shopping in my store tell me they do the same thing as me. Even with our children long gone from home, we still seem to cook as if they were still there. Making large potfuls of soup, stew, etc. This happened again to me. I wanted to make a batch of Blanche’s potato leek soup. Except that I had more leeks than called for so I multiplied the recipe 12 times to use all of my leeks. I have laughingly said in the past that I could get hired by the Canadian Army as a cook as I already cook in very large quantities. haha. That being said, this soup is worth making in any quantity. You don’t even need to use any cream, milk will do just fine.

I puree the cooked potatoes and leeks and freeze this mixture in ziploc bags. When I want some soup, I just thaw a bag and add milk to thin to the desired consistency. Blanche gave me her recipe many years ago and it is simply the best! Many thanks Blanche! Enjoy a great week!

INGREDIENTS: (This recipe makes 8 servings. In my pictures, I made 12x this quantity.)

From the desk of Jim McDonell - Queen's Park Update