by Editorial Board
in News and Announcements
Reading Time: 51 mins read
28 1 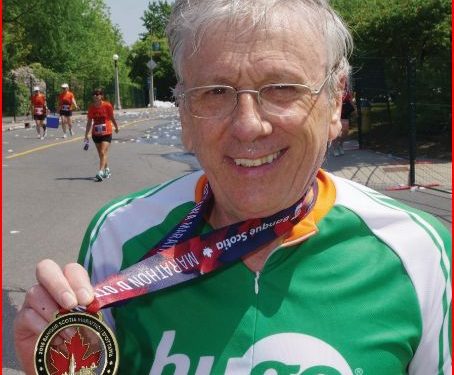 It was very hot and some gave up or collapsed in the intense heat. For me, the toughest challenge was my balance. I was continually searching for a flat surface somewhere in the middle of the road where I could remain upright and not have to fight my balance issue. The HUGO ROLLATOR did it’s job and prevented a fall for the duration of the 42.2 km speed walk.

This grueling marathon started at 7 am in the cool morning air. It was almost cold when we started. Right from the start my balance was not good and did not improve with the heat of the day.

At the end when asked how he felt while catching his breath, Bob had this to say “The big heavy medal feels good.”

The marathon: This was my first ever full marathon, which for those who have never tried it, is a 42.2 km race. My time trials leading up to the marathon were 30 km distances. My personal best time was 3 hours, 38 minutes, 33 seconds, achieved on the nice and cool Civic Complex walking track on February 29th. My tactic was simple. Finish the race! I started the race in a very big crowd moving slowly and stayed there for a while. My heart rate was only 115-120, which was good. At 21 km my heart rate was not exceeding 140, which was amazing. Half the marathon finished in 3 hours at an average speed of 7km/h And then the heat descended and I was slowly cooking and slower moving. At the 35 km distance, my time was 5 hours, 9 minutes, 40 seconds. My heart rate was in the 150s. At 38km I was well roasted and hit the wall; heart rate 160. I stopped and sat on the grass for a while and just wondered what the hell I was doing out here. The sensible thing to do was quit, but instead I stood up again and continued slowly along my way. The last 2km took me over 24 minutes. Then the finish line was in sight so I sprinted to the finish, which wasn’t quite the finish, it was the next line which was another 50 meters further. Heart rate 170. Oh what the hell. One more push and I fell over the finish line and could no longer stand. An excellent team of volunteers quickly picked me up and wheeled me in a wheel chair to the medical treatment tent where I was treated for my exhaustion. I finished the marathon!! 65 and still alive.

So what does a balance problem feel like. Just spin around a 100 times and feel the spinning world I cope with every day, all day.

Why the balance problem and what is being done.

The balance problem started in October 2012 when I was admitted to Cornwall General Hospital with a blood clot on my large intestine. A funny place for a blood clot. Three surgeries and three months later I had lost my balance. A second blood clot in the neck ( normal place) made things worse.

In January 2013 I left hospital and began physiotherapy, which helped me on the way. I purchased my walker and learned to race. The walker replaced my road bikes I had been racing since 2001. At first I felt humiliated, but soon discovered the technique of speed walking, and enjoyed racing my walker.. Hopefully, one day I will race a bicycle again.

In September 2013 I raced my walker a distance of 20 km and created the inaugural Terry Fox Wobbly Walker Walk-a-thon. HUGO MOBILITY sponsored the event and have sponsored my walker racing since. My races: Lachine/Bonneville Half Marathon 2014 and 2015. Run for MS, Cornwall, 2015 and 2016. Alzheimer’s walk for Memories, Alexandria, 2014 and Cornwall, 2105. Both half marathons.

My balance was improving until October, 2015. I had some pain in my eyes and discovered I had cataracts that were causing vision problems, and I believe, preventing my balance from improving. In August the cataract surgery will be performed on both eyes. Fingers crossed.

46,913 runners started and due to the very high temperatures nearly 9,000 did not finish the event.

What’s next: September 2016 – I will be celebrating my 66th birthday with a 50km speed walk for Terry Fox. My annual Wobbly Walker Walk-a-thon.