by Editorial Board
in News and Announcements
Reading Time: 2 mins read
37 1 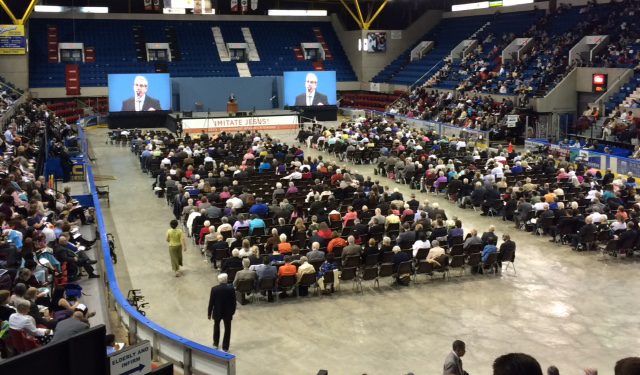 Thousands of Jehovah’s Witnesses start converging in Cornwall on Friday, June 10th for the first of three Watch Tower conventions being held at the Cornwall Civic Complex in the Ed Lumley Arena.

Altogether more than 7,500 delegates will be attending the three conventions, pumping in excess of $4.5 million dollars in economic benefits into the community.

During the months of June through August, in Canada, Jehovah’s Witnesses will present 57 convention programs in 26 locations across the country.  This year’s convention theme is “Remain Loyal to Jehovah.”  The three-day program will feature 49 presentations, each exploring the theme “loyalty.”

“We strongly believe that loyalty is an essential part of any healthy relationship”, says Lynn Hess, one of the local Cornwall Convention Co-ordinators.  “Our convention this year features content that will help people develop stronger bonds with friends, family members and, above all with God” he says.

A special highlight of the program will be on Sunday where, by means of a gripping featurelength film, one can observe how King Hezekiah “held fast to Jehovah” while being besieged by his enemies. -2 Kings 18:6.  Another short film will be shown on Saturday, featuring a modern day family and their determination to be loyal to Jehovah in spite of intense suffering.

The public is invited to attend any session or the entire program at the Cornwall Civic Complex.  There is no admission fee as the Conventions of Jehovah’s Witnesses are supported entirely by voluntary donations.

“We are delighted to host this important event once again,” said Janice Robinson, Facilities Rental Co-ordinator.  “The organizers work very hard each year to put on such a successful convention.  We have been so fortunate to work with Watch Tower since 1998. They have truly become a part of our community.  Next year will be exciting as we will be hosting the 19th Annual Watch Tower Conference!”