Interview with Medictation who play House of TARG on August 1st 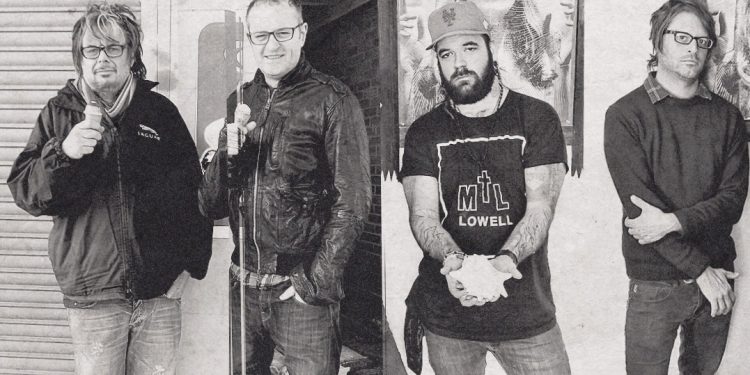 Ottawa Ontario – Medictation, who were born from the ashes of legendary punk bands Leatherface and The Sainte Catherines, are playing House of TARG on August 1st.

“It had stemmed from continuing to do something as we had done a joint split 7”, for the tour and it could have been anything from another 7” split or an album split, with both bands? So instead of a record split, it turned into a band split,” said Graeme Philliskirk.

“So we had kept in touch and made contact and said, “Hey, do you think we can do something and record together”? Hugo Mudie added.

Being in a Trans-Atlantic band has it’s challenges, but the band members of Medictation figured out a song writing process that worked across an ocean and two different continents.

“We had agreed to jointly offer the same amount of songs but Fred and my workload got really busy so we thought this was a problem. We got in touch with Graeme and told him, but Graeme and Dickie just said, if its ok with you we will just carry on getting ideas down and send them to you. It worked fine,” Hugo Mudie explained.

“It wasn’t a problem at all, we just kept working in my studio back in Sunderland – Studio 13. It would have been great to rehearse together, play the songs and see how they worked. I think we were all conscious of this but we arrived in Montreal, had three rehearsals, which went really well and just, recorded it,” Graeme Philliskirk proclaimed.

“Yeah, it went really well, we had a great time in the studio, everyone just got on with what was needed, and it was very relaxing,” Hugo Mudie reflected.

“It really is about good communication, Hugo and Fred communicate well, so any issues are dealt with and removed very quickly. Also, you have to work hard individually and all of us did this and supported each other,” Graeme Philliskirk added.

Earlier this year Medictation released their first album Warm Places which is available through Paper + Plastick Records. Some music fans might compare it to Leatherface and The Saint Catherines, but the album represents something new.

“I don’t think any of us, actually, thought for a second about trying to emulate, both bands, we just went with what came first and it worked!” said Hugo Mudie.

“Considering who is playing on the record, there will be some people who will compare, I suppose its only natural. I mean Dickie (Hammond) has such a sound that, certain songs will make people think of Leatherface and I’m sure some songs will sound like our bands. It was a great mix to hear, Dickie and Fred playing together and you can hear Fred’s Atlantic, influence shining through, Dickie loved Fred’s guitar, haha! I remember, when we got home listening to the record in the studio and Dickie said, “Fred’s just amazing”.” said Graeme Philliskirk

“Dickie left a very big legacy, in his music, I mean that’s all he lived for, and he loved it. He influenced so many people with his guitar playing and wrote some amazing songs. It was hard for us in Leatherface to see his struggle getting worse and we new it was inevitable, with what happened. At one point when we did this project, I actually thought he was going to beat it, but after three or four weeks, we new that wasn’t going to happen. Frankie (Stubbs) and I spoke not that long ago, in fact we laugh because he always comes up in our conversations and we both said how much of a big hole he has left for us. We all miss him. I’m so pleased we did this record, it was hard at times, but it was an honor, indeed. It’s sad for me, because he had so many songs left in him, but it wasn’t to be,” Graeme Philliskirk recalled.

“He was a massive influence to us, and many people around the world. It was an honor to actually do this with him and we are so proud of recording this with Dickie. He was so funny and we all laughed constantly, it was one of the things when we originally toured with him, we remember about him, joking on all the time,” said Hugo Mudie.

It’s tragic that Dickie Hammond passed away, but now after a break the show must go on. An Ontario and Quebec tour has been organized, and Hugo and Graeme are looking forward to their upcoming tour including a show in Ottawa.

House of TARG is located at 1077 Bank Street in Ottawa Ontario.

For more information about the Medictation show visit the event page on Facebook.

Letter to the editor from Ribfest Chairperson