Interview with Chixdiggit who are celebrating 25 years of punk 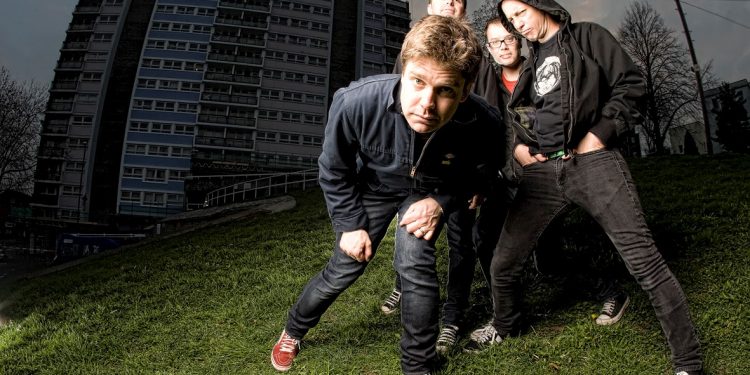 Ottawa Ontario – Canadian pop-punk legends Chixdiggit are celebrating their 25th anniversary with a tour, a new album on Fat Wreck Chords, and a beer named in their honour. The tour kicks off with a concert on September 22nd at House of TARG in Ottawa. The new beer will be available at each of their upcoming Ontario shows.

The band features KJ Jansen on vocals and guitar, Mark O’Flaherty on guitar, BJ Downey on bass, and Tyler Pickering on drums.

KJ Jansen, who is 44 years old and a father of two, is the longest standing original member of the band.

“I’m the only one who can ever say he has been to every Chixdiggit show,” KJ Jansen chuckled.

The name “Chixdiggit” originated when KJ and his friends started making t-shirts while in high school before they even had a band. What started off as a joke became an entrepreneurial success.

“I don’t know who’s idea the Chixdiggit t-shirts were in high school – Mike’s, Mark’s or mine. We were all pals in high school getting into shenanigans. One of us made the t-shirts. I drew a logo in math class. Mark’s parents had a MacIntosh computer, not a Mac, a MacIntosh. We traced it and made it look nice. We put the head of Jules Deelder, a Dutch poet and artist on the t-shirts, even though we didn’t really know who he was back then. The rest was history,” KJ reminisced.

The money made off the t-shirts afforded the would-be band a drum kit. Chixdiggit were born, and a few years later the Calgary punk band got signed to a legendary record label.

Chixdiggit were signed to Sub Pop records, a record label that had also signed Nirvana, Soundgarden, Sonic Youth, Moby, the Smashing Pumpkins and others. Their first full length album, self-titled, was released on Sub Pop. However Sub Pop records wasn’t a good fit for the Canadian pop-punk band.

“It wasn’t a good fit, a bunch of people didn’t want us there. The person who had signed up left soon after. There were bands we really liked on the label like the Supersuckers and the Fastbacks. There were lots of interesting things that happened at Sub Pop when it comes to music history. That being said, I would rather have positive relations with people people versus selling a lot of records. In hindsight I would have preferred going straight to Fat Wreck Chords”, KJ confessed.

Fast forward to 2016, and the band has a new album coming out entitled “2012” which will be released in September. The song clocks in at 25 minutes and is longer than the song “The Decline” by Nofx. According to KJ the album is a tour diary of sorts and a tribute to the band’s original guitarist Mark. The band also thought about the legendary Nofx song when recording the track “2012”.

“It started off when we were finishing touring in 2012, and the original guitarist Mark thought of leaving the band. We told him to take time off to think about it. During that time I started writing songs, and the first couple were about towns we had played in 2012. I had a feeling Mark was going to leave, and that’s when I came up with the idea of a tour diary. So it all morphed into one song. We wanted to make it one second longer than The Decline by Nofx, maybe making it greater than that song somehow. The Decline was a part of our thinking when making the album. At one point the song was about four times longer than the Decline and we had to really cut it back. We came up with a song that is 25 minutes long,” explained KJ.

KJ is very proud of this new song which appears on Fat Wreck Chords. It represents his best work over the course of 25 years, and it is also very personal.

“The latest song is the one I’m most proud of, because it took lots of time and effort. It’s a song for my best friend that I toured with all these years. It’s also on Fat Wreck Chords which is a good fit. Pretty much all the bands we like are on that label. They have great people who work hard. It feels like it was always meant to be”, said KJ.

The new album will be toasted with a new beer – a beer that even the chicks will dig (get it). Big Rig Brewery based out of Ottawa manufactured a new beer in honour of the band’s 25th anniversary.

“The Chixdiggit beer comes from Big Rig Brewery based out of Ottawa. Melanie Kaye, who was also working with them on something, set us up with them. She figured it would be a good fit. It really was. The beer is going to be ready for the upcoming tour and ready for our Ontario dates. I haven’t tried the final brew, but there was research and development done, and by research and development I mean a day of drinking in Toronto. From what I tasted, it’s going to be a really good beer,” said KJ.

The band frequently uses humour in it’s lyrics, and KJ finds inspiration for that in day to day experiences. Humour is a part of the band’s philosophy to create fun music and fun shows where everyone feels welcomed.

“Inspiration comes from people that we know or situations that were funny. Bands that I like, people had a good time, it wasn’t a cool club. You didn’t have to belong or look or act a certain way. It’s more about the party,” KJ added.

After 25 years, what keeps the band going? The short answer is finding ways to have fun.

“Lots of things helped keep us going. Working with a great people and a great record label. We toured a lot to the year 2000. It had been fun up to that point, but then it became a grind. Whatever we do has to be fun. It’s better to make less money, but have fun, and spend that money on fun things,” KJ reflected.

“I don’t think punk is something that could ever die,” Chixdiggit frontman KJ concluded.

Spectrasonic presents the Chixdiggit 25th Anniversary Tour on Thursday, September 22, 2016 at House of TARG. Doors open at 9pm, and the event is 19+. Tickets are available online or at Vertigo Records in Ottawa for $15. Opening the show for Chixdiggit are the BOIDS, and Pistols At Dawn.