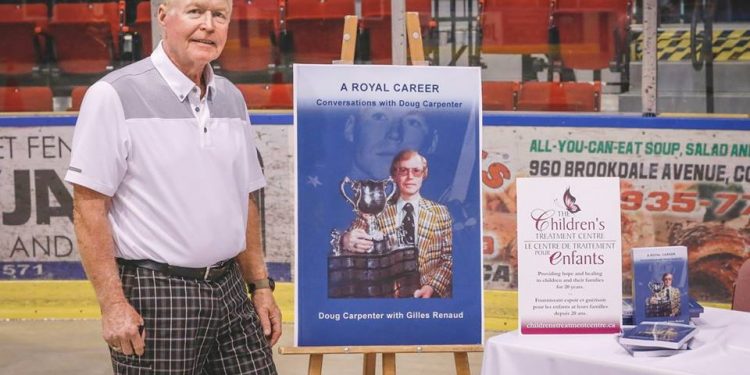 “A Royal Career: Conversations with Doug Carpenter” was published and released earlier this year. The book, co-written by Doug Carpenter and Gilles Renaud, is a benefit for the Children’s Treatment Centre. The Children’s Treatment Centre is a community based, community supported agency committed to the prevention and treatment of child abuse in Cornwall, the United Counties of Stormont, Dundas and Glengarry and Akwesasne.

The co-author, Gilles Renaud, has been a judge since 1995. One day he approached his neighbour Doug Carpenter with the idea of writing his biography.

“Gilles Renaud is a neighbour, he lives one door over. He moved here three and a half years ago. I never got to know him at first. One day he came to me and said he wanted to write a book about my career. I was kind of in shock. Before heading to California on RV he approached me about getting my scrap books. Team Boost Club’s make annual books, and I have 23 or so and treasure them. He took the scrap books. While on vacation, a month and a half later, Chapter One came in by email. I would read the chapters, add, delete, and send it back. He’d then write a final version. We went on like this until the book was complete,” Doug Carpenter recalled.

“Gilles Renaud is big in the Children’s Treatment Centre. I learned about it and what they do. I don’t want any money. I don’t need anymore than what I have now. If it could help families and children, I’d be very happy. I paid for the printing of the books and the entire $30 goes to the Children’s Treatment Centre. It is my way to give to a charity, and I am very satisfied with that,” Doug Carpenter explained.

The biography explores his career, including his fondest memory of coaching the Cornwall Royals – winning the Memorial Cup.

“My fondest memory coaching the Cornwall Royals is winning the Memorial Cup in my second year. It’s quite a feat to win a Canadian Championship. It was the pot of gold at the end of the rainbow. I went on the AHL after that. The NHL changed the rules where they could draft 18 year old players. We lost a lot of players like Dale Hawerchcuk, Marc Crawford, and others,” Doug Carpenter reminisced. “If it wasn’t for the rule change I might have stayed on with the Cornwall Royals, especially with guys like Doug Gilmour coming up”.

In 1985, during his tenure coaching the New Jersey Devils, he coached Team Canada to a silver at the World Men’s Hockey Championship. Doug Carpenter had the chance to work with a couple of young future NHL superstars like Mario Lemieux, Steve Yzerman, and Kirk Muller. Coaching talented players like Lemieux is not a challenge, instead the greatest hurdle is figuring out how to maximize their talents.

“It’s not a big challenge to coach players like that. They just play. They have the built in desire to play well night after night. As a coach you try to maximize their talent, whether that means putting them on the power play or whatever else. You don’t have to motivate a Mario Lemieux or Kirk Muller. That’s why they are who they are,” Doug Carpenter disclosed.

A few players that Doug Carpenter coached became coaches themselves, for example Claude Julien and Marc Crawford – both of whom coached Stanley Cup championship teams. He sees the same thing in those coaches as he saw in players like Mario Lemieux, people who have an instinct and desire to win.

“Like the type of players I was speaking about before, these are the people you don’t have to motivate. They are the type of people who have a build in instinct and desire to win. They want to stay in the game so they go to coaching, and Claude Julien and Marc Crawford won Stanley Cups. It’s one thing to win, but to win championships you have to have talent. Like the expression goes, a talented jockey can’t win Kentucky derby with a mule, they need one of the best horses to win,” Doug Carpenter added.

His philosophy as a coach is simple, you have to play the game with the players you have and build systems around those types of players.

“You have to try to get the best out of the players and the talent that they have. Whether it’s on the power play, or penalty kill. If you don’t have an offensive team you can’t score a lot of goals. You might practice more on defensive zone or the fore check. Your system can’t go in an offensive direction if you don’t have the players for that. You try to find the best chemistry, and the best lines for your players to succeed,” said Doug Carpenter.

Doug Carpenter did something as a coach of the Toronto Maple Leafs, that doesn’t happen often (at least not in recent history). He coached the team, that is celebrating it’s 100th anniversary, to the Stanley Cup playoffs in 1990.

Now, at the age of 74, he is enjoying retirement and doesn’t focus on the game of hockey as much as he once did, however he has noted some fundamental changes to the game.

“I don’t follow it that much anymore, it’s not that important to me. We are in California most of the winter, and I watch the occasional game. I’ve been out of hockey for a long time. Do I miss it? No. I did other things after coaching in the mid 90s. It’s still a great game. It’s now very precise. The players are much more talented than they use to be. You now have ice year round. Back in the day you’d play other sports in the summer like baseball softball, or whatever. Now you have to concentrate on hockey at least 11 months a year. There are summer programs, and if you don’t do that you’re not going to make it. If you’re are going to be a hockey player you need to work at it year round,” Doug Carpenter concluded.

Recently Doug Carpenter attended the first ever Newsy Lalonde Day honouring Cornwall’s first hockey star. He had a booth promoting his new book and the Children’s Treatment Centre. If you would like to purchase a copy of the book, you can get it online here.