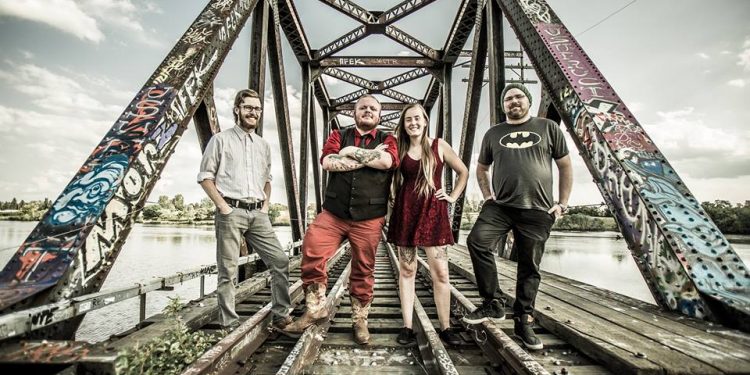 Project Mantra recently released a radio single and music video for their song “Darkest Before The Dawn,” which has received airplay on CBC Radio, CKWS Television, CogecoTV, and a variety of other regional multimedia outlets.

The band is now on tour in support of their new album Fusion Manifesto.

Frontman Leigh Bursey is also a Brockville City Councillor. For Leigh Bursey politics and music are a natural fit, but that is not always the case for Project Mantra.

“I personally believe that politics and music are a natural fit, but that doesn’t imply that my colleagues or constituents always feel the same way. When I think about growing up, activist songwriters really helped spur my interest in social policies and foreign affairs. Bands like The Clash and Rage Against the Machine were huge influences for me, and artists like David Bowie challenged the boundaries of heteronormativity. In fact, live music is really what brought me to the dance. If I hadn’t made inroads in my community as a performer, I don’t know that I would have ever had the profile or courage to put myself out there and stand for public office,” said Leigh Bursey.

The new album from Project Mantra is entitled “Fusion Manifesto” because it is a fusion of different sounds and styles.

“My bass player Alex always gets a kick out of the album title “Fusion Manifesto” because he grew up as a big fan of Linking Park’s “Hybrid Theory” album, but there is really no intentional correlation there. The concept is simple enough, really. Some of these songs are new and some are old and have never been properly released before now. It is a fusion of styles and sounds from a band that at the time of recording was going through some dramatic stylistic changes. We are a genre-hopping band that experiments with a variety of styles and sounds, all the while sticking with certain consistent elements. Furthermore, I am a bit of a poet and storyteller. Thus the manifesto part. While some of these songs are merely hooks coupled with fiction, there are a lot of personal elements within these songs also. A lot of darkness which is absolutely autobiographical,” Leigh Bursey reflected.

That darkness stems in part from personal demons Leigh Bursey has faced in his own mind. The album was created during a time when lead singer Leigh Bursey was going through a debilitating depression.

“This album was conceived and created during a time when the band faced a number of uncertainties, including dealing with a singer who was in the midst of a very debilitating depression. This band helped me overcome so much of my own personal destruction, and instead of attempting to smother my demons, we allowed them to manifest on stage,” Leigh Bursey confided.

The album is low fidelity, with audible imperfections, which give the recordings authenticity.

“Fusion Manifesto is a mostly live, authentically raw album, with mic pops and broken strings and ad-libbed lyrics in many places. We wanted to give the listener something honest,” Leigh Bursey added.

The new album will help create exposure for Project Mantra, but it may not generate a lot of revenues, especially when more and more music fans use streaming services instead of buying physical copies of an album.

“Streaming services can be great for bands and artists who are searching for an audience, but they can also make it hard for the musicians to generate a profit. If you are a major artist with a developed fanbase, maybe this would be a different story, but it can be hard to live off of exposure. I can’t eat exposure. That said, I am so grateful to anyone who would want to listen to my songs. We as a band are at a stage where anyone coming out to our shows is a big deal for us. If we were looking to get rich, we would probably find another passion. It’s a bit of a catch twenty-two,” said Leigh Bursey.

What’s next for Project Mantra? There is already a follow-up recording in the works, and another music video.

“For us, the sky is the limit. All I know is when I am onstage is when I feel the most alive. We value each other as human beings immensely. We are a family, and watching and experiencing those moments where one or all of us transforms onstage is a really magical thing. So I can’t see us taking a backseat after working so hard to build some momentum.”

“We have begun recording our follow up. New songs are being developed. Old songs are being recreated. And when inspiration strikes you, it’s best to just get out of the way and let whatever you are creating take on a life of it’s own. All I know is I am so grateful to be on this journey with people I love, and playing songs about people who are there to hear them,” Leigh Bursey pointed out.

“We just recently released a music video for our song “Darkest Before the Dawn,” which was featured on CBC Radio earlier this year, and we are hoping to release our second music video later this year,” Leigh Bursey added.

Cornwall audiences not familiar with Project Mantra can expect to see a band with passion, energy, and eccentricity on Thursday night.

“We have never played at La Maison before, and we are excited. Cornwall has always been incredibly kind and supportive to us, so we want to return that gesture by offering our best to you. Expect a lot of sweat, a lot of passion, and a whole lot of energy. Expect eccentricity, and expect a certain urgency. We could play a million shows, but each and every one of them is special. August 18th will be no different. We have some great local support acts in Mena Hardy and Mic E.P., and a premiere local destination for live music. And we will be playing for our supper. Every person who pays to see us is insuring we make it to the next show in the next city. So suffice to say, we owe them their money’s worth,” Leigh Bursey concluded.

Before the concert, earlier that day, Project Mantra will also be playing live on local internet radio. They will be playing an on air set during The Pretty Cool Records radio show hosted by Chad Coleman. The show broadcasts live every Thursday evening from 6:30-7:30 PM on DCN.

The concert Thursday, August 18th at La Maison Tavern is presented by Concrete Angel Promotions. Doors for the concert open at 9pm, admission is $5, and the event is 19+. Opening the show for Project Mantra are Mic E.P. (Mike Paquin) and Mena Hardy. La Maison Tavern is located at 1900 Montreal Rd in the east-end of Cornwall Ontario. For more information visit the event page on Facebook.