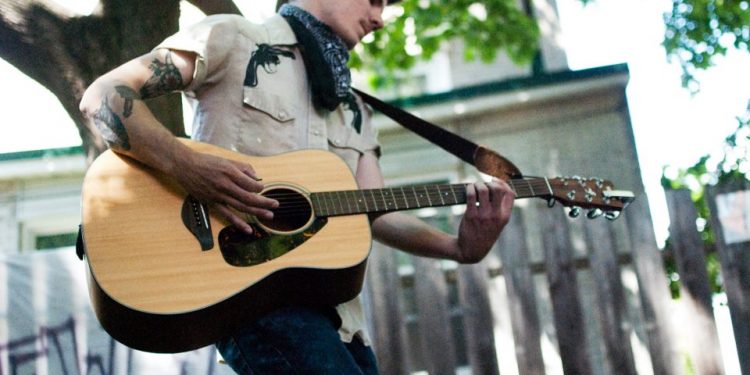 Ottawa Ontario – Get ready to party like it’s 1986 with musician Seany Sharko, and don’t forget to bring a walkman cassette player! The folk punk singer/songwriter has a cassette release party and concert on Saturday, September 3rd at Pressed in Ottawa.

Seany Sharko, who was born on a cattle farm in Athens Ontario, writes ballads of love, life and the disappointments that inevitably occur. Currently residing in Ottawa, this self-proclaimed cowboy rotates vocally between soft spoken words and the rough-hewn timbre that make his music resonate. And his music will resonate with fans on this latest release.

Seany Sharko’s new album is entitled “September Comes Too Soon”. The album title originates from a poem he once wrote.

“The album is called, September Comes Too Soon, which came from the name of a poem I wrote awhile back. It’s just that autumn feeling. I’ve had a lot of apartment leases come up in September, and best friends have moved to other cities for university. I’ve moved to other cities too. There is something a little anxiety inducing about change, but it can be thrilling. I wanted to include the poem in the liner notes, but we ran out of space”, Seany Sharko explains.

The latest Seany Sharko album is courtesy of Pretty Cool! Records, Chad Coleman’s record label, based out of Cornwall Ontario.

“I recorded the album over the course of a few months in a couple of different practice spaces and also in the dining room of my apartment. There was no real plan for the recordings, other than I had a bunch of songs that had been kicking around that I just wanted to nail down for posterity. I looked into putting them out on an LP, but the cost of releasing vinyl was way out of my budget. Around the same time, Chad from Pretty Cool Records had booked me for a gig in Cornwall and I mentioned to him I was doing some recording. Pretty Cool does cassettes, I think, mainly because Chad is obsessed with the 1980s. He has the best collection of 80s ephemera I’ve ever seen. He offered to put the songs out for me, and I couldn’t imagine him doing it on any media other than cassette – although I think he eventually wants to put out some cd’s and vinyl”, Seany Sharko added.

Many musicians are feeling the pinch of music streaming services, however Seany Sharko seems unfazed. Perhaps it’s the DIY ethos of the punk scene, that still produces records and cassettes, that keeps punk musicians more insulated from the changes happening to the music industry.

“I spend pretty much all my money on records, so when I hear stories about the dire shape of the industry, I’m like, what!? I just came back from the Record Centre with like 10 lp’s! But I guess I’m not normal. I get a ton of streams on my songs. If those streams were paid downloads I’d probably be doing alright for myself. I’m not sure what else you can do. In with the new, out with the old, right?” Seany Sharko pondered.

The Ottawa punk music scene has changed a lot since the 1990s, but Seany Sharko still sees a lot of great things happening in the city. There are new venues, new festivals, new zines, and new rehearsal spaces.

“It’s definitely not like it was in 90’s that’s for sure. But a lot of people have been working their butts off, doing tremendous things for the scene. Targ has become a venue every touring band wants to play. Ottawa Explosion weekend is now Ottawa Explosion week(s)! Arboretum Fest has a ton of great bands every year; awesome punk bands like Bonnie Doon, playing with Sloan, a classic Canadian rock and roll band! People are still putting out paper zines in these modern times. Ottawa Beat is a new one that just came out last month from Luke Martin, the guy who runs Capital Rehearsal Studios. There is a lot going on, so I think the Ottawa scene will be vibrant for a long time to come”, Seany Sharko said.

For those who have not seen Seany Sharko play live before, here is what music fans can expect from him in concert.

“The album has a full band on it, but when I play live, it’s usually just me with an acoustic guitar. It can be hard to get the same energy you would have if you had a drum kit behind you, so I try to play as many upbeat songs as I can. I also do a lot of that Johnny Cash boom-chicka-boom-chicka fright train strumming. An acoustic can actually sound like an entire band if you just beat the hell out of it while you strum”, Seany Sharko explained.

Accompanying Seany Sharko for this occasion will be Ballad Fiasco from Brockville, Painted Forest from Cornwall, and Fire Antlers from Ottawa. The doors open at 7:30pm with a $7 admission for a night of indie, folk and psychedelic music. For another $8 fans can purchase Seany Sharko’s new album and it comes with a 1″ pin.

There might be one more band playing the album release, a band featuring Seany Sharko.

The venue Pressed is located at 750 Gladstone Ave. in Ottawa Ontario.