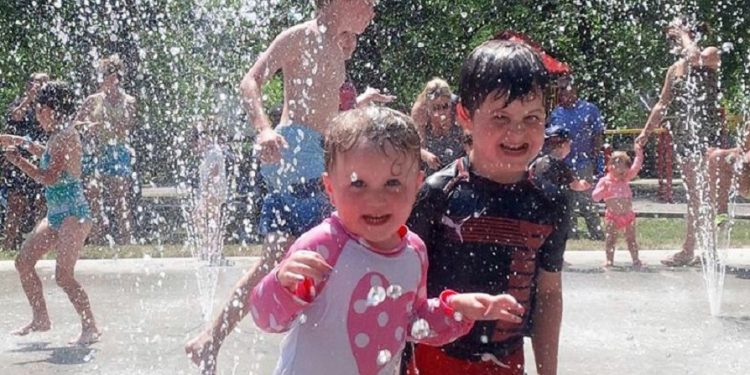 Cornwall Ontario – City officials joined with residents on Friday to celebrate the official opening of the new splashpad in Riverdale Park.

Youngsters Peyton and Dexter, pictured here, were among the first to try it out! They approve of the new splashpad.

What is the Leading Cause of Car Accidents?

The splashpad – the third such facility in Cornwall – is located east of the existing playground structure and features over a dozen different water features. A fully-accessible change room and washroom facility was also established nearby as part of the project.

“This is an important investment that adds to the quality of life that our residents enjoy,” said Mayor Leslie O’Shaughnessy. “It is sure to be well-used by residents and I’m excited that families will be able to make use of it this summer.”

Construction of the splashpad was carried out by Grant Marion Construction of Cornwall. The work began at the end of May and it was actually completed ahead of schedule.

“City Council was keen on getting it installed as soon as possible so that families could make use of it this year,” said Richard Bourdeau, Supervisor of Facilities/Operations. “We worked hard to accelerate the tendering process in order to get the splashpad operational sooner. The original completion date was
mid-August so we are pleased to have been able to turn the water on a bit sooner.”

The new splashpad will be in operation seven days a week, from 9 am to 8 pm. This is the same operating hours as the two other splashpads in Lamoureux Park and St. Theresa Park